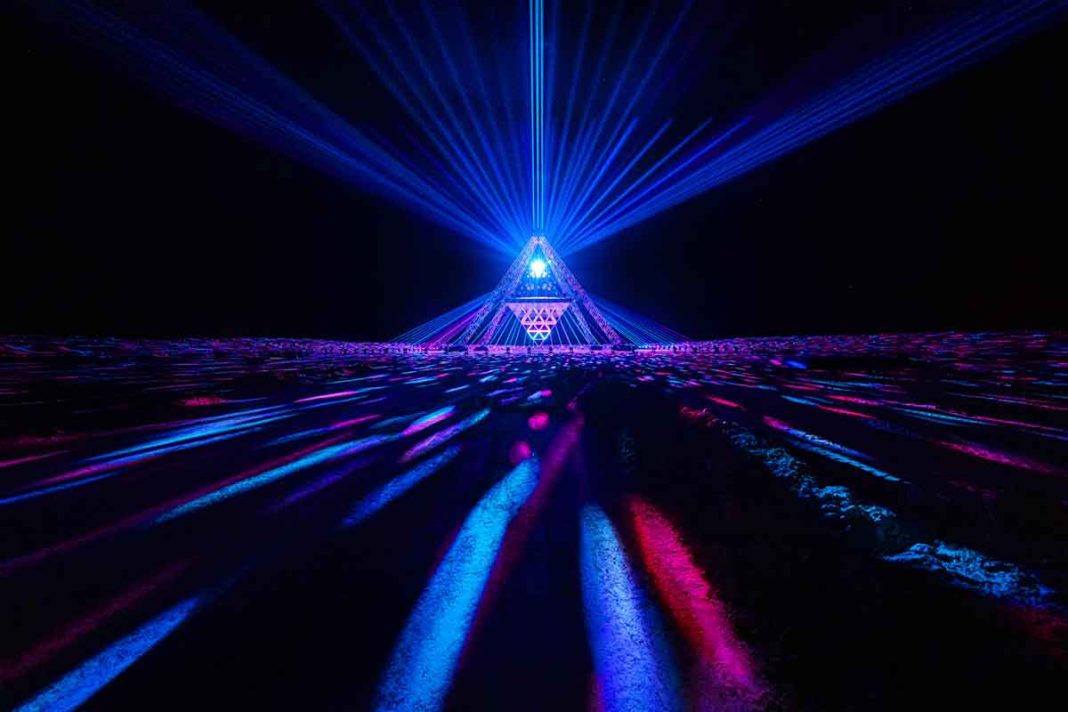 Saudi Arabian festival of light and art Noor Riyadh returned in November with its biggest ever programme comprising over 190 artworks and 500 activities. One of the annual festival’s most eye-catching and ambitious artworks was AXION – an otherworldly temporary lighting installation devised in the mind of WHITEVoid’s Christopher Bauder.

Based around one of Bauder’s previous creations, Stalactite, which was created mainly for indoor settings, AXION is an enormous temporary light show that has been created specifically to be displayed in the desert. With its sprawling array of light tubes, mirror balls and moving lights, it looks like a giant scientific device for space exploration or particle detection. “The idea was to create something that looks as though it has been designed to communicate with lights and music into outer space or even another dimension; it looks like a light modulator that functions as a communication device with an unknown recipient,” Bauder informed TPMEA.

“My ideas come from two sources,” he said of his inspiration. “One side of it is the technical development. In this case I am using moving lights as a structural element, but I see them not in the traditional live event sense but as light modifying machines that can be used to create tangible architectural shapes in mid air. It feels almost physical. If you step into the space created by the moving lights, you feel as though you’re inside a room. It’s like an ethereal cathedral, even though you’re still outside under the open sky. You have this feeling of architectural spatial confinement.”

The artist also draws inspiration from his background growing up around the nightclubs of Berlin. “I was a techno kid, and I wanted to bring this feeling of community and communication through lights and music that you have inside a club to art installations and a bit more of a ‘grown up’ community.”

Having provided a smaller installation for last year’s Noor Riyadh, Bauder was keen to get involved in the festival again and he had an idea tailor made for the environment. “I knew what was possible after seeing the site in 2021, and the desert environment lent itself perfectly to the concept,” he said.

Key to the design was the use of 80 Ayrton Cobras. “I like to create architectural vector-based shapes made of light, but usually I do that indoors using a lot of haze to make it visible or using lasers,” Bauder explained. “However, with the Ayrton Cobra, it was the first time I could achieve this effect outdoors without using haze or fog that I could actively control. They have the strength, uniformity of beam and the outdoor capability. This allows me to leave them out in the dusty environment of the desert, which adds great texture in the lights.”

He added: “I don’t think this would have been possible without the Cobra; it’s the first fixture I’ve seen that brings all the required power and precision with an IP65 rating. From a distance, the beam looks almost like a laser, but it is more solid and has more volume, and it doesn’t have a visible conversion point. All these properties were essential to construct the vision.”

Also important to the project was the “precision and control” of an MA Lighting grandMA3 console combined with Derivatives TouchDesigner software. “We had to achieve perfection, with all the beams pointing to virtual moving co-ordinates in space,” Bauder noted. “All this needed to come together to create such an art piece.”

The artwork can run in several ways, with either a pre-programmed exhibition mode that plays a 30-minute synchronised show to music, or with a live musician or DJ, with the lighting being manipulated in real time. “I always like to bring a bit of the Berlin party vibe to wherever we go,” Bauder laughed, recalling the opening party, which saw DJ KiNK – who composed the 30-minute track – play a live set to a lucky VIP audience. “He was originally supposed to play for two hours, but I think he ended up playing for around five! It was a surreal experience to have our own rave in the middle of the Saudi Arabian desert under the light installation.”

Martin Kuhn, Senior Technical Manager Special Projects at WHITEVoid, was a key member of the delivery team. “As soon as we got the go-ahead, Christopher and I went to Saudi to find a location,” he recalled. After three days of site visits, they settled on a location around an hour’s drive outside of the city. “It was a good balance of being completely remote, but also not so far away that it would be hard to get people to come.”

Of course, building in a remote desert environment is fraught with challenges, and Kuhn recalled the struggle of creating what was essentially a self-contained village, complete with power and infrastructure, before the arduous work of levelling of ground could even begin. “We even had to dig trenches to run the cabling underground,” he laughed, recalling being literally ‘in the trenches’ with a pickaxe. “In Saudi Arabia, everything is possible.”

According to Kuhn, the most crucial part of the load-in was the positioning of the 76 Ayrton Cobras surrounding the installation (the other four were on the top of the pyramid). “I insisted that we sat them on concrete bases; we needed something 100% flat, and we would never have been able to get the required accuracy with them on the sand.”

Bauder and Kuhn were joined by WHITEVoid’s Marc Liebold on technical management, Andreas Vollmer on lighting programming, and Tarek el Kihel on visual programming, as well as Martin Lauth, who represented the technical supplier ES:ME Entertainment Services as technical lead for rigging, audio, and lighting. “Martin and ES:ME played a huge role in organising everything,” Kuhn recalled.

Reflecting on the achievement, Bauder was delighted with the result. “I like that we managed to put it in such a remote place. It needed darkness as a background and there aren’t many darker places than the desert,” he concluded. “The skies were so clear and vast and full of stars. I love the contrast between the abstract raw nature and the technology driven art we’re putting into it.”