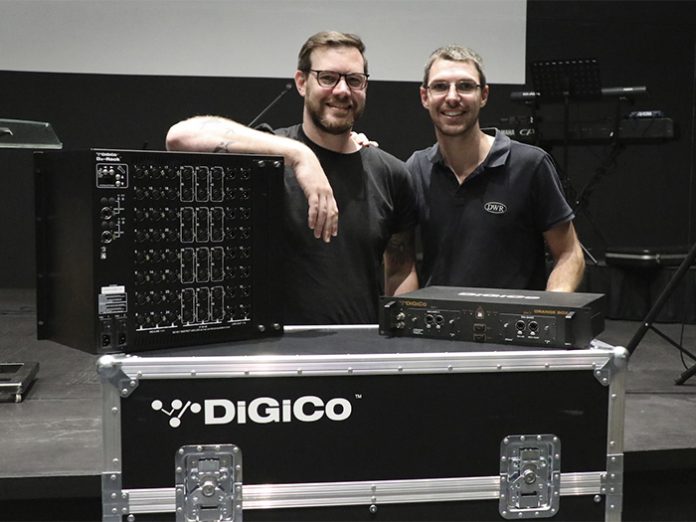 Praise, music, dance and a love for people are just a few of the ingredients that make Olive Tree Church in Florida Road, Berea a beacon of light and hope. Officially established in 2008, the gospel-centred church has a vision not to build a big church, but to pastor a big city and they have various branches scattered throughout Durban. Relevant to the community with an excellent worship team, the church recently invested in a DiGiCo SD9 with D2 rack and an Orange Box, purchased from DWR Distribution.

Stephen Bagwell, Technical Director at Olive Tree has been with the church since 2014.

Kyle Robson of DWR recalled: “When I started working at DWR Distribution in 2016, we did our first DiGiCo training sessions around the country and Stephen was there. He was so determined that he would one day have a DiGiCo console, and now his dream has become a reality.”

The new gear, consisting of an SD9, D2 rack and Orange Box, was initially sent down to Durban, where DWR’s Nicholas Barnes got the system up and running. It was followed up with training by Kyle. “Olive Tree seats around five hundred people and it’s a very family orientated environment,” Robson described. “From what I’ve seen, the band is incredible, and they have some really good musos. Stephen himself is a talented engineer. The DiGiCo system compliments everything the church already has in place and is trying to achieve.”

A former student at Performing Arts Technologies, and having worked in the entertainment industry before joining the church, Bagwell could see how lighting, audio and AV played a major role in enhancing the worship experience. “Our worship experiences are honest and authentic, which was one of the things that drew me to Olive Tree,” Bagwell noted. “Above all, seeking God’s presence and making declarations of faith have been key elements for us. We strive for the best because He deserves our best. Olive Tree leaned towards an excellent audio experience, and DiGiCo was the next step for us. “

Bagwell said that working on the SD9 has been a treat. “DiGiCo’s workflow has become second nature, and the flexibility of the console has really impressed me. I have serious processing power on any input, bus or output, and I no longer have to say, ‘If only I could just…’ My creativity is my limitation. Adding the Orange box with Dante card has allowed us to introduce a Dante network into our system which has the unlimited potential of where we could take our internal audio going forward.”

Concluded Nicholas Barnes: “It’s wonderful to see an ongoing discussion for the last four years turn into a reality. It’s so positive to see the work Stephen is doing, now that he has the right tools. All the best to him and to the Olive Tree team! Enjoy the new DiGiCo system and keep making good music.”