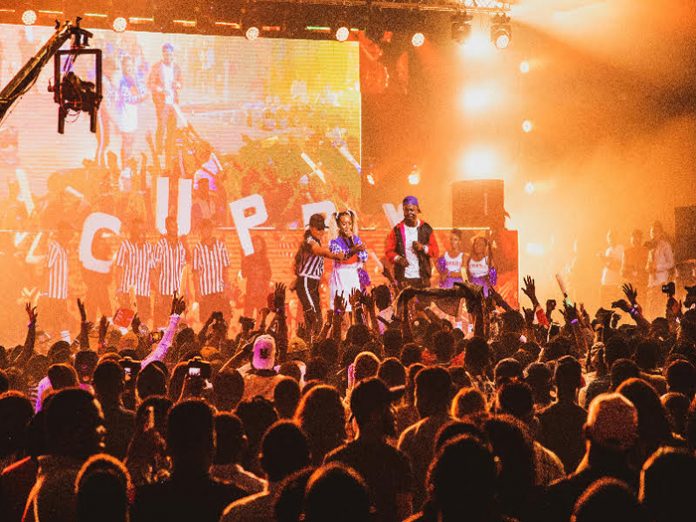 On a night filled with fun, ceremony, all underscored by an explosion of powerful music, Pepsi unveiled four of Nigeria’s foremost DJs as its ambassadors. The quartet of DJ Obi, DJ Cuppy, DJ Spinall and DJ Xclusive, considered to be A-list DJs rocking the Nigerian entertainment industry, brought their A-games to what may be termed the Lituation experience.

Artists such as Tekno, WizKid, Tiwa Savage, among others, came to perform with them on their set. There was also a special appearance onstage by the Big Brother Naija (BBNaija) Season 3 contestants.

Cytech World Communication was the tech company contracted to make this entire night happen. They supplied stage, lighting and audio, with the show set-up of two stages at each end of the venue. On one side was the Main Stage for all the performances and at the other end, basically at the back of the venue, was the second stage which featured a 3D screen, used mainly for the DJ main intros.

The audio set-up on the Main Stage PA included 12 Outline GTO C-12 (6 aside) with 10 Outline DBS 18-2 Subs (5 aside), plus 2 Outline Doppia II 9075 (1 aside), which were front fills for the audience next to the stage ramp. For the delay speakers from the main stage, there was 4 Outline GTO C-12 per side over 2 Outline Lab 21 to get the height necessary for complete coverage.

Onstage, the 4 DJs all pre-set on a long DJ table to ensure there was good even coverage for their monitoring. To achieve this, Cytech used 2 Outline Doppia II 9075 aside over 2 Subtech 218 per side, controlled from the booth, with the DJ controllers routed from FOH to allow control on the entire mix.

For the Stage B set-up, there was 4 Outline GTO C-12 per side over 3 Outline DBS 18-2 Subs to get an excellent elevation. The plan was to surprise the audience and have them focused on Stage B, but when the intro was played the audience would turn 180 degrees to see and focus on Stage A at the other end of the venue. The key thing was to have a big enough PA to take the audience’s attention to Stage B at the outset.

Here is a quick chat with Mr Remember Chaitezvi, the Senior Sound Engineer at Cytech World Communication on the Pepsi night set-up. “The idea was to have a system that would be big enough to play over an audience even when they were shouting the loudest. In my head, I had a goal that I just needed enough power to keep the DJ music as a feature which is a big concern when you have a DJ playing music, as compared for example to a jazz band playing where the audience is a bit calmer; the other advantage of a bigger system, well distributed in the audience space, is that you don’t have to drive the system hard to cover the space.

“My approach was to focus on Stage A as the main stage with delay speakers set up in respect to the main stage. Stage B I took as an effects stage for the intros, which I would use at full level while I still had a bit of it fed into the Stage A main PA, plus the delay speakers, to create an illusion of enormous scale.”

He concluded: “When you do a show like this, you are more likely to run into issues of making it louder or wanting more bass or the DJs not being happy with their monitors. I was really happy that the Outline system performed consistently and efficiently throughout the night, with the Outline DBS subs kicking it on the low end. A happy audience equals a happy Remember!”