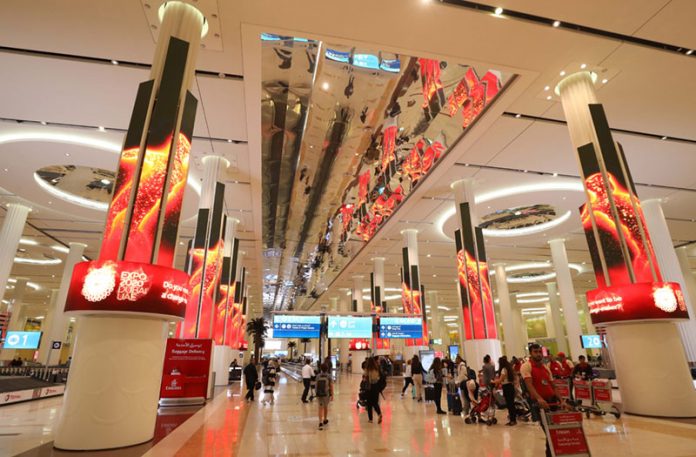 Raven AV’s Dan Roncoroni handled the audio aspects of the installation, following an earlier preparatory visit to site by Out Board’s Robin Whittaker.

The solution hinged around a 32-channel TiMax SoundHub delivering a multilinear soundscape via Dante to 16 EM Acoustics EMS-51s, which were secured to haloes of flexible LED display panels fixed around four of the airport’s marble pillars.

With the airport’s highly reflective environment and characteristically high level of background noise providing a challenging environment, Roncoroni explained: “The project called for a spatial audio setup outside the envelope of most spatial audio processors. It was just one of many situations where you could either mess around doing something difficult in a difficult way, or you just do what you need to with TiMax!”

Four loudspeakers per pillar were positioned to give coverage across a 120-degree angle per pillar. “I don’t know another processor that could so easily have dealt with groups of four loudspeakers pointing at each other from 20m apart at the widest gap,” Roncoroni reflected.

He concluded: “TiMax allowed us to create an incredible and cohesive soundscape that is impressive to all who pass through the installation. With the excellent localisation achieved by TiMax, the airport’s reflective environment stopped being a worry, the loudspeakers effectively became acoustically invisible and there was a sound field of incredible quality.”