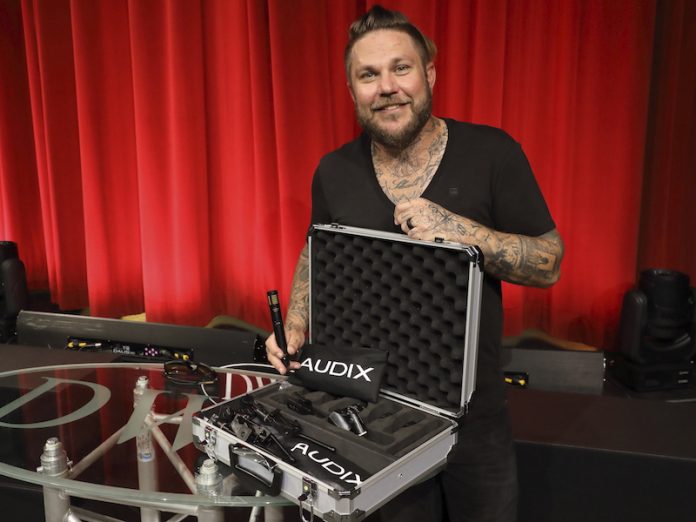 Dale Schnettler, the drummer from Prime Circle has acquired a set of Audix Microphones for his drum kit from DWR Distribution.

Schnettler has been a musician since 16, he was originally a guitarist but was prompted by his late father to switch to drums. “I learned the basics and never looked back, I was now a drummer,” and being a drummer for this long means he has valuable wisdom to share. “I was in a band that played corporate shows for many years and from the beginning, I knew the value of investing in your musical equipment,” he said when asked about the importance of gear.

“Maybe when you start out you can’t afford the best of the best for everything but invest in something, it’s the only way to move up and gain professionalism.” These words don’t come from the drummer of one of South Africa’s biggest bands, they come from Schnettler a dedicated musician who has started at the bottom and worked his way up into playing for one of South Africa’s biggest band. There is no arrogance or detachedness just passion, knowledge and an eagerness to share it.

His career with Prime Circle started with two band members, Ross Learmonth and Marco Gomes, wanting a new drummer after their previous one stepped down to be a full-time family man. As bands are usually filled with big personalities the two members wanted a drummer, but they disagreed on which drummer. Ross wanted the drummer from Soul Proxy whilst Marco wanted a drummer from a different band, Summit. Luckily for Schnettler, he was the drummer for both bands.  “I went from playing in front of 100 people to 10 000 people overnight and my knowledge about gear soon became practical as I now had access to the best stuff.”

When asked to explain why he wanted Audix, he simply said: “Honestly, it’s the best.” His years behind the kit mean he has used and seen all the various microphones and for him, the Audix range stands out as the most reliable, versatile and sturdy. Sturdiness comes in handy if you’ve ever seen him play, he is Rock drummer after.  “These mics are going to last me a while, Audix is tough.”

The set he picked up was a mix of dynamic and condenser mics specifically designed for drums. The D2, D4, D6, and the i5 are all designed to pick up the drums they’re assigned to in a dynamic manner to reduce excess noise and maximize clarity, included in his pack were ADX51 condenser overhead mics to capture his hi-hats.