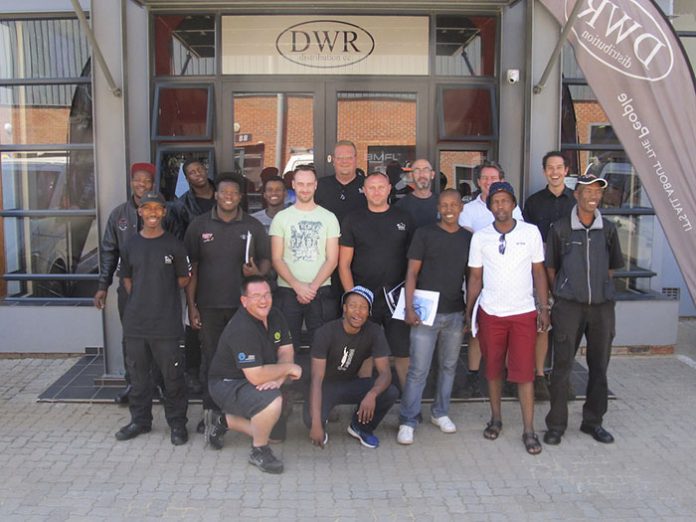 A Prolyte Campus Workshop, presented by Date Jonkman and Ruud De Deugd was hosted at DWR Distribution in Johannesburg from the 1 – 4 November.

The course presented intricate information to assist riggers to comply with safety regulations practiced throughout the world. The topics were covered in detail and delegates were given information on the types of loading and the effect on truss, building a safe MPT or ST Tower, slinging of truss, the process of calculating applied forces and predicting the effects of environmental influences and the basic preconditions to safely build a roof structure. DWR Distribution were pleased with the great feedback received.

“The South African delegates are not behind in rigging. World-wide we are all at the same level – we are all consistently incompetent,” he teased. “We don’t know what we don’t know and that’s the main thing in our business, wherever you are. The delegates were impressed to learn things they did not know. The guys who know roof systems also learnt. This is what it is all about.”

Ruud joined the industry as a Sound Engineer in 2001 and worked as a Rigger and Stage Builder since 2008. He has a great deal of experience and has furthered this with doing, reading and doing some more. “The people were good and Robert Izzett from DWR took good care of us, and the food was good,” said Ruud. “The most fun part we had was after the course, when I heard someone say, those guys know what they are talking about.”

“I think the course has been brilliant. There is a lot of stuff that we have been doing and we realise now that there are alternate ways of doing things. It’s a learning curve and it’s awesome. We got to ask a lot of questions and receive answers back immediately, which was really great.”

“I really think truss should not be sold unless the person completes this course. There is a lot of information that is very good – people don’t always realise the complexity of trussing systems. There are many things that uniformed safety officers want, that actually at the end of the day could result in creating an issue. It’s a very good course.

“The course was very important. There are some things that we have never known since working with Prolyte trussing. What was very important to me was learning about the safety aspects and then taking care of trussing from a maintenance point of view.”

“For me the training helped me to refresh, especially as I have been doing this for years and years. It helped me to remember things like maintenance and checking the truss. I think I have grown a lot, it has helped me with my rigging and I understand better than I did before.”

“I found the course very interesting and I think our team learnt a lot. I’ve been doing structures for the past eight years. It’s as I told Duncan Riley of DWR, there is no such thing as bad training. You always learn something.”

“I found it very interesting and it opened my eyes to certain things within the industry which people sometimes overlook. We’ll definitely be able to make use of what we learnt at the training in the future.”

“The course was fantastic. I learnt a lot about trusses, how to build structures, weight, size, and wind impact.”

“The course was very informative. At Marshall Music I mainly sell equipment but you need to know and have this training when someone wants to buy truss from you. You need to make sure that what you’re selling them actually stays up, that people adhere to codes. I found it very useful.”