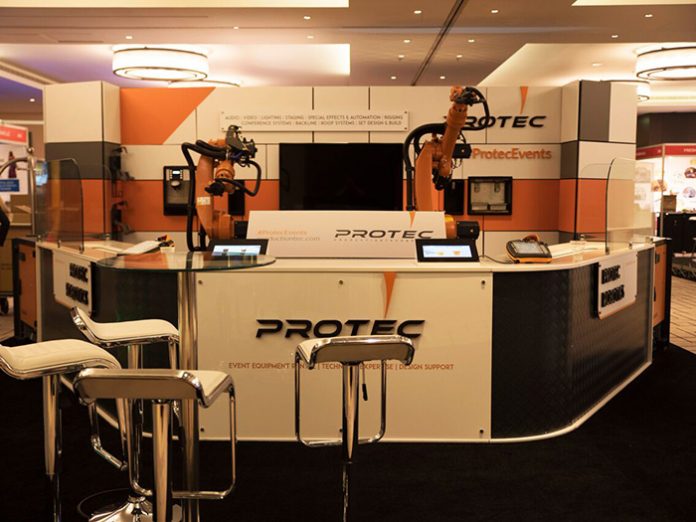 Trade exhibitions the stature of ME Event Expo staged at the Marriot Marquis, Dubai, raise a certain presentational dilemma for a service provider in the event sector: if you’re not exhibiting a product, something clear, three dimensional, and with an obvious function, then what are you showing? For Protec, the largest such service provider in the Middle East, the response was two-fold, as their Marketing Manager Eddie Andradé explained: “We looked at the amazing array of technologies in our inventory and asked ourselves the simple question – what can you do with this? And the simple answer is ‘pretty much anything you like’. The trick is to enable our clients to do likewise. So we designed a studio around a boardroom type environment, installed a large video display, and equipped it with some of the creative tools we possess, 3D stage design, lighting design, video and sound. Assembled together in one place, these tools allowed the possibility of a virtual walkthrough experience.”

James Lakin, Protec’s Director of Operations gives some insight into how this approach proved so successful. “The interactive creative environment we built at the expo proved better than expected. As you might imagine its attraction could easily have been limited to technically inclined types, MA 3D for lighting, d3 Designer for video, 3D CAD, L-Acoustics Soundvision 3.0, are all powerful packages. Instead we were able to make the technology behind it largely transparent; that in turn removes any sense of hesitation from people less technically knowledgeable. Here they could casually and easily sketch, select and trigger at will, partly because we kept the choices largely generic and non-specific; just the raw bones. And partly because it was a lot of fun. With the underlying technology effectively invisible, visitors immediately engaged with what was a creative playground.”

Andradé continued: “Last year a bar was created in the reception area for the ‘UAE AI & Robotics Award for Good’ event. We were then asked to place two of our large industrial robots in it and programme them as baristas, serving a variety of coffee and drinks to the expo visitors. This year we did the same, but with a twist.”

Lakin added: “The ballroom expo space at the Marquis is on the sixth floor, getting gear up there in a two sq metre elevator excluded the robots we used last year; they weighed over a tonne each, which is why they appeared in the reception lobby. Now we have some much smaller, elevator friendly Kuka robots: each weighs just 250kg. Basically this is a robot with six axis of movement and you can – within weight limits (16kg) – put whatever you like at the end of it. As with the creative playground on our stand, the idea was to encourage people to think about their own ideas. For example, some visitors were interested in using the robots concealed, to move stage set pieces. They allow for movement outside the purely linear, which is very interesting to set designers. You only have to think about John Napier’s groundbreaking set design for Les Miserables to imagine how that might work.”

That the expo was a success for Protec was underlined by the award they received for ‘Best use of Event Technology’ for the company’s use of robotics across multiple event disciplines at the Expo’s associated awards event. “All these different technologies are there to be used,” concluded Andradé. “It only remains for people to think the unthinkable.”