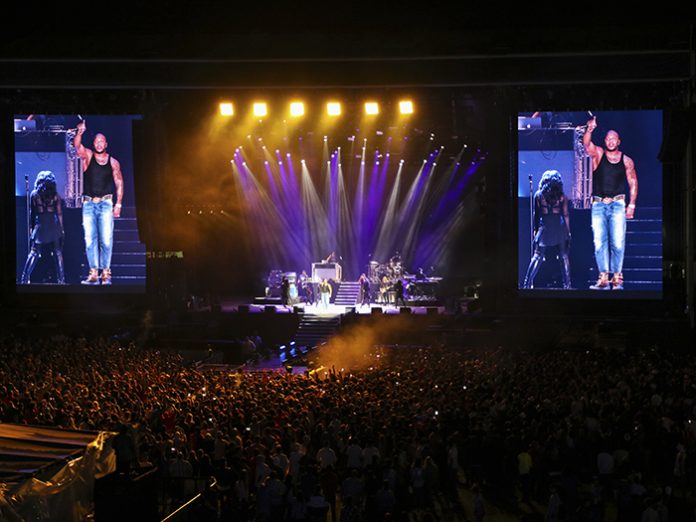 Protec, which until recently has focussed mainly on corporate events having taken a year’s sabbatical from rock ‘n’ roll, made a dramatic U-turn in March 2016 to support three concerts in the UAE, including Nicki Minaj and the Autism Rocks Festival in Dubai, the latter featuring Flo Rida and Tyga. Protec also provided lighting for the very first Korean cultural convention that took place in Abu Dhabi’s du Arena on 25 March featuring performances by K-Pop artists such as boy group BTS, Taeyeon from the group Girls’ Generation, Kyuhyun from Super Junior, Double S 301, hip-hop group Monsta X, girl group Spica and pop star Ailee.

Protec provided lighting, video and rigging for the show. Working closely with Nicki’s LD, Kathy Beer, and Video Engineer Daunté Kenner, the production was as good as it gets. “I have been with her since last year and this is my third time in Dubai – my first time with Protec. [It’s] a great company with great gear, lovely crew and everything went swimmingly. I would definitely work with Protec again!” said Kathy. She added: “As with anything we had to make a few changes because all the communication was done via email but the guys were quick to respond and the changes were made without fuss and with great speed. We were also able to end rehearsal early, which I always love.”

Protec Video’s biggest challenge was getting the trim height for the main screen just right, to avoid the risers from cutting into the bottom of the screen, and the top of the screen getting in the way of the back lighting fixtures. A total of 158 sq metres of Protec’s 6mm and 154 sq metres of its 9mm Mambo LED panels were used for the main stage. The IMAG screens for the main stage were set in portrait and the content started initially in 16×9 format using part of the screen, which then changed to full screen portrait to accept the live camera feed. Kenner said: “This is my first tour with Nicki, about my tenth time in Dubai and my second time with Protec and [they were] great. When I arrived everything was set up the way it needed to be and there were no issues. I literally plug it in and it works.”

Protec’s Project Manager Mark Battle added: “The production for this gig worked out very well from a technical and logistical point of view. The site was laid out very well, there was plenty of room in the backstage area for all vehicles from different aspects of the production and personnel to move around with ease without getting in each others’ way. The stage was large enough with big wings and a large enough area behind the backdrop of the stage to move a festival production around with ease. We had five days to build the entire rig, which was ample time and made the build very relaxed.”

The same evening Nicki Minaj was performing in Dubai, Protec was working on the lighting in the du Arena on Yas Island (around 350 fixtures made up of Clay Paky Mythos, Sharpy profiles and washes, Stormys, A-LEDA K10 B-EYEs, molefays and Gladiator followspots, all run on MA Lighting grandMA2 full size desks) and rigging, for another concert where thousands of fans, from across the country and around the region gathered at the venue for another first. KCON, the world’s biggest K-pop festival, made its way to the Middle East for the first, put together by Flash Entertainment.

The convention showcased different aspects of the Korean culture and went down a treat in the Middle East. Over the past few years, the spread of South Korean entertainment culture also known as the Korean wave or the ‘Hallyu’ movement has swept across various countries, the Middle East being no exception.

Back in Dubai a week later, 117Live hosted the Autism Rocks festival on 1 April, which saw Flo Rida and Tyga take to the stage at the end of the family day to mark Autism Awareness Month. Both artists were at the top of their game and the crowds that came in support of autism awareness were treated to high-energy performances.

After the Nicki Minaj show, Protec had to change the lighting plot to suit the Autism Rocks Festival plan but Arron Russ, Protec’s lighting designer and Head of Department, also designed the lighting for Flo Rida and was able to utilise the same rigging plan that was used for Nicki Minaj. This meant that the changeover between the two shows was fairly seamless.

Rain the night before the Autism Rocks gig meant that certain precautions had to be taken in order to keep all the electrical equipment dry. All the lights in the rig and the back video wall were fine as the stage was waterproof. The only challenge was to keep the front truss and the lights on the thrust dry. Battle explained: “We had to use plastic sheeting over all of this, which worked, even though it was quite windy at times. When we arrived on the show day and everything was soaking wet, it turned out that we had only lost one light due to water damage. The other challenge was that it was also exposed to the wind and sand/dust. The large IMAG video screens that we had on either side of the downstage wings had to be monitored very closely. At the end of the day however, it was another perfectly executed gig, with no more rain to dampen anyone’s spirits.”