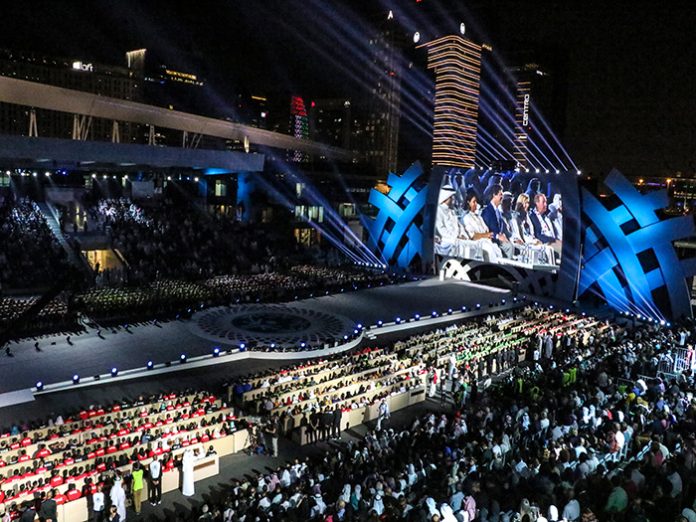 Protec provided lighting, audio and video as well as some rigging for the show in ADNEC. HQ Worldwide provided further lighting design and video content for the Special Olympics IX MENA Games 2018.

Kicking off with an enthusiastic bang in Abu Dhabi on 17 March 2018, the torch toured the city, hitting some famous landmarks along the way, before arriving at ADNEC to the applause of the waiting 2,000 spectators.

A video entitled Welcome to my City was played and more than 1,000 Special Olympics athletes from 32 different countries entered the arena in a colourful parade to much excitement from supporters and athletes alike. Cheers and contagious smiles rippled through the entire arena.

Celebrating people of determination’s sporting abilities and talents, this is not only a significant event in the MENA region, but it also is an important test event for the 2019 World Games. Show producers HQ Worldwide wanted to deliver an opening ceremony that set the scene for the week ahead and paid due respect to the talented athletes from the UAE and visiting countries.

HQ Worldwide Project Manager, Simon Travis, said: “Due to the openness of the venue, scaffold towers were erected around the grandstand area. For the three big ones on the open side near the road we used our total fabrications EHD truss to span across so we could hang our lights. Underneath the grandstand 5 more little scaffold towers were placed so we could use our smaller truss and hang fixtures around the area.

“We had 4 follow spots towards the backend of the arena to pick up speakers and performances. We used 16 Super Sharpies on top of the set to create a nice beam effect up top. On the floor on either side of the stage, we used 4 Super Sharpies, our new Robe Pointes and Robe Spikies. Underneath the set, which was used as the stage entrance, we used 12 more Robe Spikies for more beam effects. Along the edges of the stage we used a total of 56 Clay Paky K10 B-Eyes with 30 SGM P2s and 24 Robe Pointes to create some interesting effects there and to wash along the stages for the performances.”

The set-up took 3 days, followed by 4 days of rehearsals in preparation for the 2-hour ceremony on the opening night.

Florian Hoss, senior Video Technician at Protec, explained: “We used 3 WATCHOUT Servers for Content Playback that involved the opening video, lower thirds for name-slides, timecode for other departments and audio tracks, whereas one production machine was controlling two display machines, one main and one backup. The WATCHOUT main, backup and the incoming camera signal was then switched by a Barco S3-4K to screen. The screen was powered by a quadruple stack of our 30K Barco HDF-W30 FLEX Projectors. We used two main and two backups with a seamless failover switch over Widget Designer.”

Protec’s audio department handled the large space by using 24 L-Acoustic’s K2 Loudspeakers, 12 hung either side covering the area with consistent coverage front to back. These were supported by eight SB28 Subwoofers taking care of the low end all powered by the LA8 amplifiers. The system was controlled by a DiGiCo SD5 desk. They used their new Shure Axient handheld radio systems and along with that they used Sennheiser in-ear monitors for the MCs. Communications were taken care of with Clearcom Freespeak and Helixnet, allowing the crew to wirelessly communicate effectively over the entire venue while the stage management team, Protec technicians and the client used our Motorola radios.

“With the determination shown by the competing athletes fuelling the production team to deliver the opening ceremony in an extremely short time frame and within very tight budgetary limits, Protec, Al Laith and VK furniture delivered one of the most rewarding projects to date,” commented Tim Jacobs – KTS Global/ HQ Worldwide.

“Our client – HQ worldwide pulled off an excellent show with a limited budget. Great show to be a part of. Were there challenges? Yes there were. Was it worth it – absolutely!” concluded Simon Travis – Project Manager Protec.