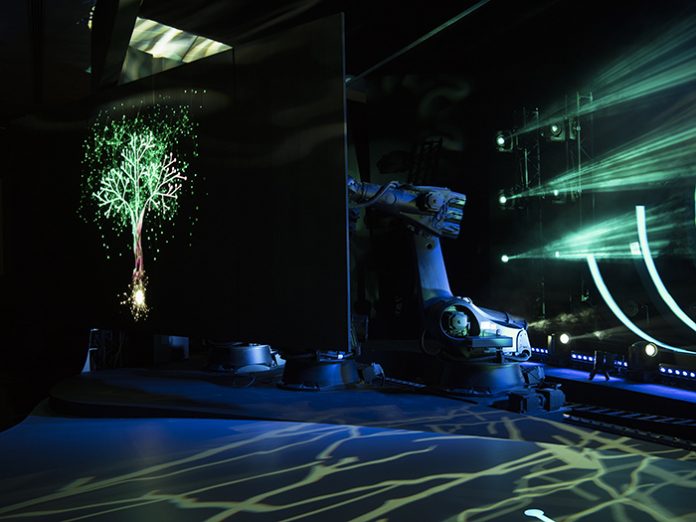 As part of the inauguration ceremony of Sadara Chemical Company (SADARA) and the Saudi Aramco Total Refining and Petrochemical Co (SATORP), Protec provided audio, video, lighting and robotics at the King Abdullah Cultural Centre, Al Jubail in Saudi Arabia. SADARA and SATORP are among the largest facilities in the refining and petrochemicals industries that support the objectives of Saudi Vision 2030.

Fabio Umilta was the Project Manager for Moment International, the creative agency for the event: “The project was challenging from the start as we only had three weeks’ notice to plan and deliver an event of this size. Shipping and programming time were only two of the challenges faced. Delivering a project of this size in such a short time would scare anyone.”

Robert Handley was Protec’s Project Manager: “Time was one of our biggest challenges on this job. We had a very small window between confirmation and the event itself. Part of our full production service was to put together and manage all the necessary visa and logistical arrangements and what usually takes a matter of weeks we managed to achieve in days.

“We took five 40ft trucks of equipment that included an L-Acoustics Kara system for audio; KUKA LED panels for video which was located left, right and centre and run with D3 server technology. It also included a comprehensive lighting rig of Claypaky and ETC fixtures along with more than 400 Schnick Schnack units, rigging for over 100m of truss, 6km of cabling and a Robotics system of 6 KUKA Kr 240-2 and 2 KUKA Linear Track.”

“Upon arrival it was clear that the pre-rigged hanging points were unsuitable,” continued Handley. “This was a venue that had a very restricted height clearance of just 10m and was a cluttered environment so we knew we had our work cut out to deliver.” “We brought in our own truss hung from the main beams of the building,” opened Ed Ross, Head of Audio at Protec.

“This allowed us to locate the PA positions accurately. These still ended up being very wide for the room so it was crucial to have some powerful 115xtHIQ speakers to cover the VIP section at the front. The King was seated very far forward at the front so we positioned a 5XT speaker on the ground a few meters in front of him to make sure he had decent high frequency coverage and speech intelligibility. We then positioned 4 115xtHIQ speakers towards the back of the room on a truss to make sure there was ample high frequencies at the back of the auditorium and smooth out the overall frequency response front to back. The desk was a Digico SD9 with SD-mini and D-rack for distribution of signal, and we used Figure 53 Qlab for playback and Shure UR series radio microphones.”

On the stage itself, a significant amount of collaboration was required to fit the video, lighting and crucially, the Schnick Schnack installation between the Protec crew and the scenic and set designers. Hanley explained: “The Schnick Schnack was placed downstage centre, in front of the King, travelling up to centre stage in the shape of a tree. The King activated it by holding a small acrylic tree prop, which he gave to two children who placed it on the round trigger, which activated the Schnick Schnack. The tree was the symbol of the two companies merging.”

Time proved to be the primary challenge for KUKA robot programmer, Amir Haghshenas: “Under normal circumstances we would have time for a full setup of the robots in our warehouse which wasn’t possible here. Each robot needs between three to four hours to programme one sequence and we had six different sequences. At the same time, we needed an empty stage to move the robots and obviously, there were always people working around the robots. To achieve what we had to in the time available, we simplified some of the moves. On the night, the show was all there and looked great.”

“We had twelve days to set up and, to be perfectly honest, there were times when I wasn’t sure it would all come together,” concluded Handley. “From power issues – we had to acquire more cable locally which proved problematic – to the size, shape and height of the venue and the restricted timeframe, it seemed like everything was against us. However, I can honestly say that it proved to be the best ever production I’ve been involved in my fifteen years of experience in the business.

“Our client Moment International was super-happy and the end-client was thankful and really appreciated our work and professionalism. I would also like to thank Moment International for trusting in our ability to create a large scale event like this in such a short time. It was a pleasure to work alongside them as their AV partner.”

Zaki Saeed, Moment’s CEO, added: “Moment International, together with the team selected for the event managed to keep focused and in high spirits throughout the project despite the issues or time constraints that we faced. From the start of the project until the end we stayed as one unified team and I am extremely happy with the end result.”