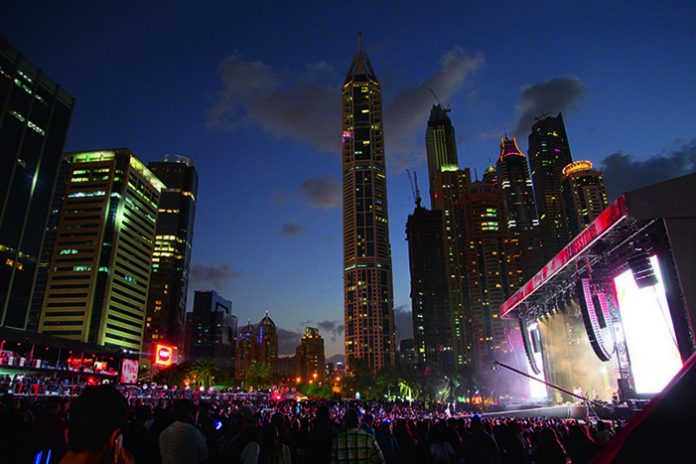 DESPITE ONLY BEING IN ITS THIRD YEAR, REDFEST HAS ALREADY MADE ITSELF A MAJOR PART OF THE UAE’S MUSIC FESTIVAL CALENDAR. TPMEA’S STE DURHAM RETURNED TO DUBAI’S MEDIA CITY AMPHITHEATRE TO MEET THE CREW.

Initially put together collaboratively by Done Events and Virgin Radio, RedFestDXB was conceived as a hit music festival, designed to showcase the stars of the station’s current playlist.

Festival Promoter Thomas Ovesen, who was charged with booking the talent lineup, said: “This year we wanted to add more non-Virgin Radio playlist artists to add appeal to a wider audience. The festival introduced EDM talent to the festival for the first time in 2016 in the shape of Steve Aoki, a reflection of Ovesen’s compulsion to appeal to an older audience. He continued: “Having an event centred to this age group is both a strength and a weakness, Just adding EDM is not enough to expand the demographic, but it is certainly an interesting aspect.”

Due to its sloping width, the amphitheatre can comfortably host 12,000 guests in the ‘bowl’ area in front of the stage and use the rest of the space, with less in the way of sight lines, for food and beverage stands, second stages or activation zones. Although the first two years of RedFest boasted a second stage and promenade area for attractions such as retail and art exhibitions, 2016 saw the team adopt a more straightforward approach. Ovesen continued: “The focus this year was on the main stage rather than giving people too many choices. It represents a different view on festival experience, and something that allows the guests to make sure they catch their favourite stars on stage.”

Site Manager for Done Events, Robert Hodson, was backstage making sure all structural and logistical elements of the event went off without a hitch. According to Hodson, the key priority for the close-knit team at RedFest was to avoid cutting corners – to give the best show possible and ensure that all of the suppliers’ reputations remained just as strong after the gig. This has led to each year comprising of more or less the same core companies.

Al Laith were on-site to create some of the structural elements such as the necessary viewing and VIP platforms. Hodson said: “Everybody that comes to the event wants to see the show. We try and subscribe to this view and Al Laith are very good at being creative with the tiered systems we request.”

Keeping everything ticking over was Gulf Show Power, with which Hodson has a long and productive relationship. He said: “All their equipment is industry standard and they will help every end user, powering everything from food trucks to video screens.”

Although RedFest is a two-day event, Hodson said that he sees this as a bonus, rather than added workload: “It doesn’t cause any difficulty for us in terms of preparation time. I’d personally prefer to keep it up because it’s so soul destroying ripping something down when you spend so much time building it. I’d keep it up for longer if I could!”

The complete system was powered by L-Acoustics LA8 amplifiers, using LA Network Manager, and controlled by a DiGiC0 SD9 at FOH, with an additional pair of Avid Profile consoles. Another Profile was present at monitor world, as was a Waves-enabled SD5.

None of the touring productions brought their own audio equipment (with the exception of Adam Lambert). Delta Sound supplied in-ear requirements audio for the rest of the artists and RF. This package included 22 Sennheiser 2050 IEMs, eight Sennheiser G3’s, eight Sennheiser 2000 Series radio microphones and 16 Shure UR4D radio microphones. “Most of the gear was running at the same time, so RF was certainly a challenge,” commented Craig Harvey, Delta Sound Project manager. Delta Sound also supported the communication requirements of the event by providing 100 Motorola radios for crew and artists, as well as a Clearcom Freespeak system integrated into the shout system.

Delta Sound’s Al Woods said: “Most of the acts are pop or dance orientated so I made sure that the system has accentuated sub bass and low end. Generally I keep the system with as much available energy as possible to ensure maximum headroom. It sounded great, really punchy and very even. I feel its important to keep the dance vibe everywhere.

“From receiving the first band rider for each artist, we ensure that absolutely everything is advanced right down to the exact microphones, input lists, output patches and miscellaneous feeds (time code, intro music, VT). The artists’ engineers will have received all of this information and if things change it is sorted before arrival. It’s a lot of spread sheets and paperwork but it pays off in the end!”

“We had some long hours and early sound checks and mixed over 50% of the artists, both at monitors and FOH. Delta are super busy at the moment so there was no way of crew doing double shifts. We had a great result with lots of positive comments from the client, visiting artists and, most importantly, paying guests.”

The lighting and video brief from Done Events specified that the rig had to look ‘big’, so as not to become dwarfed by the substantial stage and IMAG screens. The amphitheatre is a regular haunt for PRG Gearhouse’s Head of Lighting, Damien Jackson, so he was well-prepared to deliver on the team’s great expectations. He said: “There wasn’t a great deal of design being led from the incoming bands as they seemed happy to work with a ‘festival rig’, so the design was down to me.

“Firstly, I wanted to split the big upstage LED screen. All too often we see a huge LED wall at the rear of the stage, so breaking it into multiple shapes and sizes offered something different.”

This served to use more of the space available, continuing the big look. Jackson continued: “I’ve always liked having fixtures at many different levels so splitting the screen offered opportunities to squeeze in fixtures all over the stage at various heights – a dynamic I felt offered more diverse looks over the two days of Redfest.”

Jackson was not obligated to overhaul his core lighting rig too much during the festival, bar the odd floor package alteration, and only had to deal with a handful of incoming LDs. While he had slightly more work to do from a video point of view, Jackson and his team had prepared from the influx of guest media servers.

He explained: “Over half of the acts brought their own so there was a lot of re-patching to do. We had identified this during pre-production, so we were able to draw up a detailed schematic and assign the correct number of signals in the correct locations – it was just a matter of keeping on top of it once we were on site.”

Stage FX, part of the eclipse Group, was drafted in to take care of some of the weekend’s biggest moments.

The company was initially contacted to assist with some of headliner Steve Aoki’s specific requirements, providing a number of new Magic FX Stadium Shot Extremes and Co2 guns. Aoki himself even likes to get in on the action – firing the Co2 into the euphoric crowd at points during his set.

Stage FX also included on-site technical support for all the equipment being used so as to ensure health and safety precautions were followed to the letter.

Arran Hopkins, General Manager of Stage FX, commented: “In line with our commitment to health and safety, the usual procedures were taken including the use of our proven high quality European equipment, checks by our in-house HSE manager and safety briefing of the artist on the use of the handheld Co2 gun.”

These effects, combined with the already impressive production in place, contributed to make RedFest a resounding success – further cementing its place on the country’s growing portfolio of events.