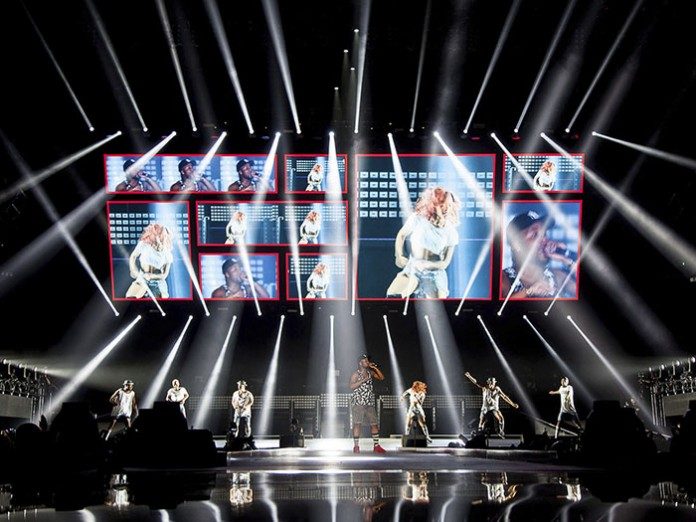 South African R’n’B singer Cassper Nyvost’s #FillUpTheDome concert on 31 October 2015 featured over 130 Robe lighting fixtures and played to a sold-out audience of 20,000 in the Ticketpro Dome in Johannesburg.

Nyovest himself approached Cape Town-based design agency Formative to provide creative direction and technical production, including video content design, for the show. The pressure was on to do something awesome production-wise, and Formative Creative Director Grant Orchard, whose lighting was a co-design with Technical Project Manager Thomas Peters, led the realisation.

Orchard, Peters and Formative first met Nyovest during the 2015 MTV Africa Awards where they were producing video content and providing playback. For #FillUpTheDome, they turned to Gearhouse South Africa, the country’s largest rental company, to provide all elements of the technical production including sound, lighting, video, staging and rigging.

Peters commented: “Gearhouse was the only company that could deliver comprehensively all the disciplines and resources needed to stage a show of this profile.”

Robe was right at the hub of Formative’s production lighting design, for which they utilised 60 Robe Pointes, 38 LEDWash 600’s, 12 PATT 2013’s, 11 CycFX 8’s and eight CitySkape Xtremes, all of which were integrated into the visual design.

Nyovest entrusted the production aesthetics entirely to Orchard and his team with the instruction to reproduce an iconic show on a par with live performances that had inspired him over the years including by Jay Z and Kanye West.

His one special request was to have a specific choreographed ‘hero’ moment during the show, which was created using a combination of his stage presence and various technologies.

As the stage design evolved, the set was covered with multiple high gloss surfaces and intense powerful light beams were required to generate the many memorable moments and looks that built throughout the show. It wasn’t a conventional “front lighting” rig as Orchard and Peters wanted a rawer, meaner and moodier look rather than something that was too over-produced.

Peters explained: “The lighting scheme was essentially about creating darkness. We approached it more like creating a piece of art rather than a standard light-show”.

With over 65 sq metres of 7mm LED video screen surface centre-stage, and another 50 panels of LED mesh product built into the trusses and two separate LED floors, Peters needed lights that really held their own in intensity, which is why he reported he chose 60 Pointes.

Ladders, for lighting positions, were rigged either side of the stage and in the auditorium, and all loaded with Pointe’s. Forty Pointe’s framed the top and bottom of the main screen, perfectly aligned for back lighting and effects.

The LEDWash 600’s, described by Peters as “A real workhorse of the SA market”, were used for numerous tasks including as traditional wash fixtures, and also run in ‘wide’ mode as effects via individual control of the three LED rings.

10 LEDWash 600’s were deployed below the screen, with 10 above, six to the sides to light the band and the rest joining the balance of the Pointe’s on the ladders.

The CycFX 8’s, a fixture that Peters said he’d “wanted to use for some time”, were positioned upstage in front of the mesh LED clad trusses. Their individual pixels were mapped and run via the d3 media server that also output the show video content, and they were also run as conventional light sources via the grandMA control console.

The 8 CitySkape Xtreme LED floods were scattered asymmetrically around the stage floor on the band risers; this large light source was used to shoot across the musicians and silhouette them.

Peters added: “The scale and look of the light source is amazing.”

This came in the encore, as Nyovest stood on a section of the LED floor which rose up on a flying platform while simultaneously a truss was lowered in above his head loaded with the 12 PATT 2013’s.

With the upstage video blasting through in this scene, Nyovest appeared to be floating in air as his show came to a conclusion.