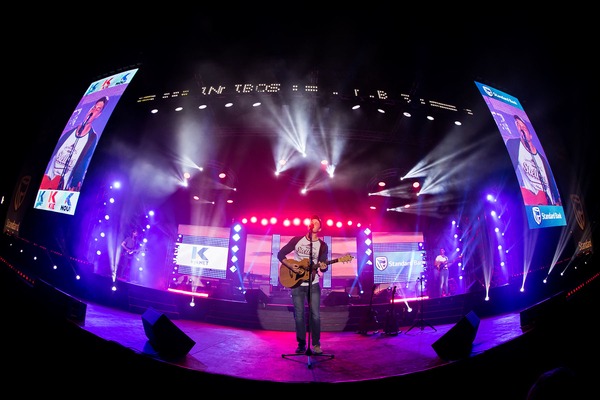 Robe moving lights were the primary light sources at the Innibos Festival 2017 main stage, a high profile arts and music festival staged in and around Mbombela in South Africa.

In 2017, nearly 151 Robes supplied by Johannesburg-based MGG Productions, played a part of the rig. These fixtures were hung on a series of trusses in the roof including three 4 metre diameter circles hung mid-stage, all staggered in heights from upstage to downstage.

12 Robe Spiider wash beams were on the upstage truss; 24 Robe Spikies were on 6-side totems together with 30 Robe LEDBeam 100s; 24 Robe LEDWash 1200s and 27 Robe LEDWash 600s, rigged on the circles and the FOH truss and used for general washing. 12 Robe Squares were positioned on 2 back truss totems and 22 CycFX 8s were in the footlights position around the front of the stage thrust.

Lighting was designed to work harmoniously with the video design which comprised a pair of 12mm portrait format side screens, each 8 metres high and 4 wide, utilised mainly for IMAG camera feeds. Onstage were 2 stacks of 5 mm screen upstage at the sides, concealing the drum kits, which were alternated with LED panels for contrast. Upstage 66 panels of 5mm screen were divided into 3 pillars, with both horizontal and vertical runs of LED panels in between.

While the CycFX 8s worked for both audience effects and footlights. As footlights, they were an important part of the design which had to light a large ensemble cast on some evenings, with no other options to execute a full width front look except from the thrust position.