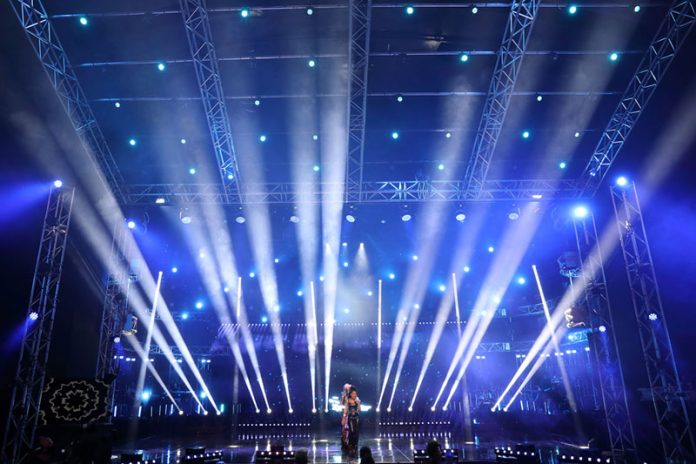 While the show would normally decamp to the 3,000-capacity Carnival City Big Top Arena in Johannesburg for the finale, this year everything remained at the State Theatre, and while accommodating a strictly limited audience of 250, the visual elements of the production were also expanded, with an additional 120 Robe moving lights added to the rig.

While the Idols Live Show rig features a number of Robe luminaires – including six BMFL Blades, 16 LEDWash 800s, 16 Pointes and 16 ColorWash 2500s – for the final, a further 120 Robe moving lights were added for maximum impact.

A total of 24 MegaPointes were loaded onto six custom-built dollies, which could be wheeled around the stage and positioned anywhere to instantly create different architecture and structural looks. “The more I use them, the more I like them and still find new effects,” Cutts said of the fixture. “It’s an outstanding beam / spotlight source, with the colour mixing adding another whole level.”

Twenty-four ESPRITES were flown above the stage and in the side wings, unleashing another layer of lighting. “I was amazed at the compact size of the ESPRITE for the power and number of features – very impressive,” Cutts declared.

Continuing with new Robe technology, eight out of a total 24 Tetra2 moving LED bars proved ideal for edging the top and bottom of the upstage 10m by 4m LED screen, with the other 16 placed along the edge of the stage in the footlights position, giving three distinctive lines of piercing Tetra2 beams and some great interactional effects.

A further 48 Spikies were rigged on five steel frames also on dollies and used to create columns of light 2.5m high by 1.5m wide in different locations onstage.

Two BaseStations controlled two Robe BMFL WashBeams located at FOH and the third system was connected to four BMFL Blades on one of the back trusses, used for tight and neat rear spotting on the theatre stage.

Cutts worked with his associate Andre Siebrits, who programmed and operated the MA Lighting grandMA2 full size console, which was running with a light as backup and an MA OnPC for visualisation, with a healthy 32 universes of DMX feeding into the system. A Green Hippo Boreal+ media server running via the console dealt with playback content for the LED screens.

“The trick was using all these extra moving lights judiciously and properly multifunctionally,” he explained, referring to lighting 12 songs over the two-hour broadcast.

“This allowed all of us on the production team to end an exceptionally challenging year on a high,” concluded Cutts who, like everyone in the industry, has been hit hard by the shutdown of live events.