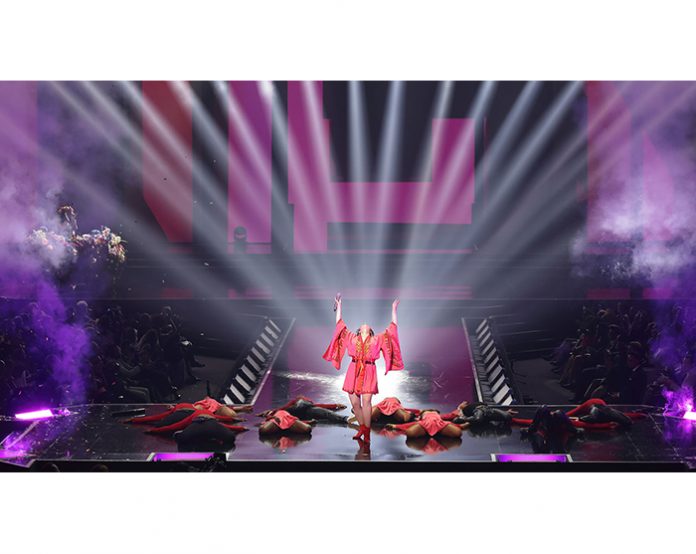 Joshua Cutts is someone who knows how to make things – stages, sets people – look beautiful, and 2018 was the 4th time he has lit the Miss South Africa beauty pageant event, which in 2018 selected the country’s delegates for the 2 highest profile global beauty contests – Miss Universe and Miss World.

The show was staged for the first time at the new Sun Arena venue at Times Square in Pretoria, South Africa and Cutts chose to illuminate the show – produced by [sic] Entertainment and directed by Gavin Wratten for live broadcast on M-NET (DSTv channel 101) andMzansi Magic (DSTv channel 161) – with a substantial Robe moving light rig of 170 fixtures.

The event’s overall lighting and the technical vendor was Dream Sets, and their production manager Eben Peltz ensured that everything ran smoothly on site. The production also used elements of the Sun Arena’s house lighting system, which also includes a large Robe rig and is facilitated by MGG.

Instead, the back wall comprised of elegant LED columns, a combination of 2.9 mm and 4.8 mm surfaces, with 16 x 7-metre high sections spread out over a width span of 28 metres. The centre featured a 5-metre-wide LED surface, also 7 metres high.

The main stage was 28 metres wide by 8 deep with a 14-metre ramp extending to the front and a 9 x 6-metre presentation stage at the end of that. Special effects included a kabuki drop at the top of the show to reveal the 12 finalists and six water features which were integral to the set and also had to be lit.

He used 18 Robe BMFL Blades for all his key lighting across the main and thrust stages with the fixtures rigged on FOH trusses for maximum reach, 12 Robe BMFL Spots were used for producing breakup and other effects down the ramp from the stage to the presenter stage at the end of the thrust.

A total of 4 V-shaped trusses were installed above the stage for the overhead lighting positions, and 18 Robe BMFL WashBeams were rigged on these and used for dramatic beam work and texturing the stage and set.

On these same LX trusses were 28 Robe Spiider LED wash beams which bathed the stage and set in a rich array of colours and the individual LEDs were mapped to give some funky into and back-of-camera looks, and to vary the beam shapes during the aerial scenes.

16 Robe ColorWash 2500E ATs were handy for performer specials. Once Robe’s brightest profile moving lights, these are still working well and efficiently after many years on the road in Dream Sets’ rental stock.

The primary moving light rig was supported with more LED strobes, six other profile moving lights and 152 Robe LED PARs dotted around the rig and the auditorium, plus 12 beam lights for the audience. Seventy-two conventional profiles were used to light the contestants when on the ramp, fashion-show style and 24 LED battens framed along the tops of the screens; Robert Juliat followspots were used for the show.

The video playback content – including VT play-ins and sponsor logos, graphics and stings – were stored on 3 Green Hippo servers, and all the lighting was run from 2 MA Lighting grandMA light consoles with an ultralight as a technical desk backstage. The show was fully manually operated, as timecode was not a practical option given more organic aspects like variations in contestants walking pace.

Cutts and assistant LD Andre Siebrits had 5 days of programming and three days of rehearsals. The upbeat musical performances by Sketchy Bongo, GoodLuck and the talented DJ Zinhlewho is hotly tipped for great things this year added a great contrast to the show.

“It was brilliant to have a good-sized lighting rig and to be able to use each of the different fixtures fully,” enthused Cutts, “it takes a lot of thinking and pre-planning, but we were able to deliver to everyone’s expectations”.