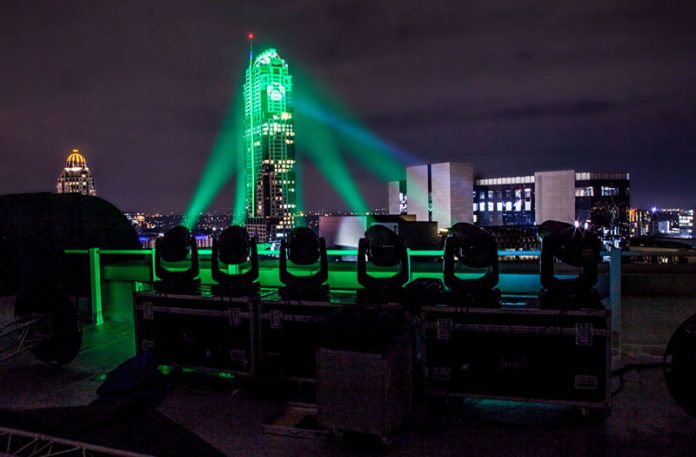 The tallest building in Africa – The Leonardo, a 234m mixed-use property development in Sandton, Johannesburg – was lit up for the South African launch of the new Microsoft Xbox Series X console, highlighted in green by Robe BMFL moving lights, with the Xbox logo emblazoned onto the top of floors of the tower.

The launch lighting scheme was designed by Greg Angelo and MSTARR’s Gareth Chambers, who chose Robe’s powerful BMFL fixture because “it was the only fixture that could do the job and blast enough light across the 550m throw distance”.

In one of the most inspiring stories to emerge from the SA lockdown, MSTARR Productions has recently been taken over by Chambers and his business partners – sound enthusiast, Zweli Ngcobo and company CFO Landy Yeatman – and undergone complete restructuring ready for a new era of enterprise. This was their first high-profile brand experience event.

Gaining the required permissions to do this involved getting the agreement of three separate buildings and their management and security companies – the Benmore Shopping Centre roof parking, the Sandton Gautrain station parking lot, and the Radisson Hotel, which also had fixtures positioned on its roof.

Two BMFL WashBeams and four BMFL Blades were deployed in each location, an operation that included manually carrying the kit up staircases in some cases to reach to the respective rooftop positions. Each set of luminaires was controlled locally by an MA Lighting grandMA Dot2 console.

Three of the BMFL Blades were fitted with custom Xbox gobos for projecting a crisp, clear image onto the building, with local power utilised at the Radisson and the fixtures in the two parking lots running off generators. The Leonardo’s permanent LED architectural lighting scheme was also turned green for the event.

“I was delighted with the BMFLs,” enthused Chambers. “They did exactly what we wanted and needed, and they were the only lights in South Africa that could have done the job!” He has in fact used BMFLs for similar long-throw applications before and to cover even longer distances up to 850m, so he was confident the lights were up to the job.