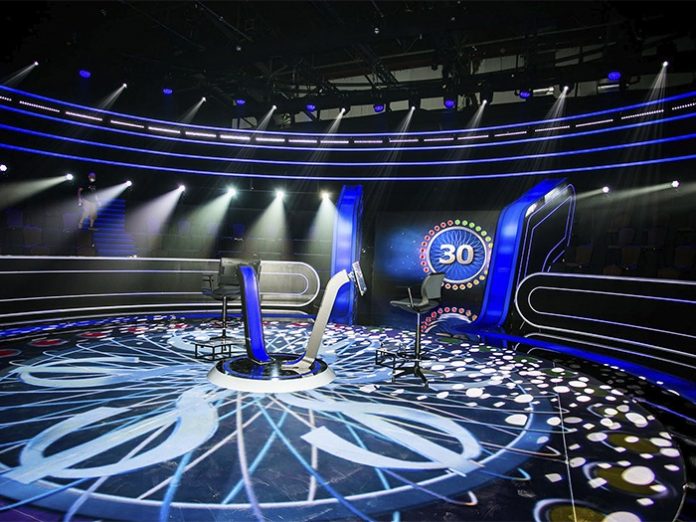 For the 2020 Israeli edition of Who Wants To Be A Millionaire, broadcast on Channel 12, Lighting Designer Ofer Jacobi was asked by producers July August Production to light the show again, 20 years after the last time he’d done so, which was the first roll out in Israel.

Ofer was absolutely delighted to be working again after the coronavirus pandemic has all but shut down the entertainment and production industry worldwide.

This time, he specified a Robe moving light rig and worked closely with set designer Oren Hanan and show director Amir Ukrainitz at Mizmor Petah Tikva Studios about 10km east of Tel Aviv. They studied the UK’s latest Who Wants To Be A Millionaire format (where the show originated, first broadcast in 1998) and followed some of this style book with a few adaptations as Ofer implemented some tweaks so both effects lighting and white light elements had more impact.

The most powerful and suspenseful moments, Ofer stated, were when host Erez Tal revealed whether the answer was correct or not, so he paid special attention to crafting these cues in addition to building up the general lighting which had to look slick and contemporary with some classic ‘Millionaire’ touches. This approach also dictated where he hung the moving lights, which were supplied by Danor Theatre and Studio Systems and comprised 18 MegaPointes, 24 Spiiders and 40 LEDBeam 150s.

Twenty-four of the LEDBeam 150s were rigged on top of a circular truss directly above the host and competitors, with the other 16 located behind the audience to fill in the gaps between the different levels. The 24 MegaPointes were “key players” in the show, programmed to do some dramatic tilt movement cues with gobos immediately after the questions were asked ramping up the atmosphere.

The 24 Spiiders were used as back lights mostly in a sumptuous deep blue colour across the audience, and they were also strategic key lights for the audience. All of these three Robe products are among Ofer’s favourite fixtures. The LEDBeam 150 he loves for its small size and brightness. The Spiider is “simply the best wash light on the market right now and has been since its launch,” he confirmed, and this potent wash beam is a regular on his lighting plots.

As for the MegaPointe, “So much has been said about this incredible fixture – it’s simply the best ‘hybrid’ around,” he said. When recording the first round of the show, all the lighting treatments looked and functioned very well.

Lighting was programmed by Ronen Ben Harosh who used two Compulite Vector lI consoles, connected in session for backup and to give Ofer control of the white lights combined with his moving lights. Programming challenges included getting the best lighting looks and effects every time which was “not difficult” with the array of choices offered by the Robes or working alongside Ofer who is “never short of ideas” commented his FOH collaborator.

Synching the lighting consoles to receive MIDI triggers from the show’s gaming computer which activates specific commands for sound and video related to screen content was an intense talk that took plenty of work and lateral thinking. Additionally, more signals from the lighting console were used to access the media server operating a series of pixel SMD effects inbuilt in the set – so there was a lot of synching happening!

Ofer and Ronen WYG’d and pre-programmed much of the show in advance, which saved basic time on site that they utilised to finesse the details. The studio was operated with strict social distancing regulations, everyone had to wear masks and frequently wash and gel their hands.

“It was like receiving breaths of air after being choked for several months,” stated Ronen. “Yes, it was like being ‘alive’ again,” Ofer chipped in. “It was beyond fantastic to be back working with our valued friends and colleagues.”

These included “all-round great guy” Inon Tal, who programmed the games computer according to the show’s international format; helpful and informative video wiz Yahav Tene, who looked after the media server, and Ziv Lemor AKA “The Belgian” who was head of lighting on set. “We could not have done without him!” declared Ronen, while Ofer added that Danor’s rental department were “fantastic to work with as always”.

The set was built by Zebra and the show’s main producer was Idit Mistriel-Eshed. Who Wants To Be A Millionaire Israel airs on Keshet channel 12 for the next two months.