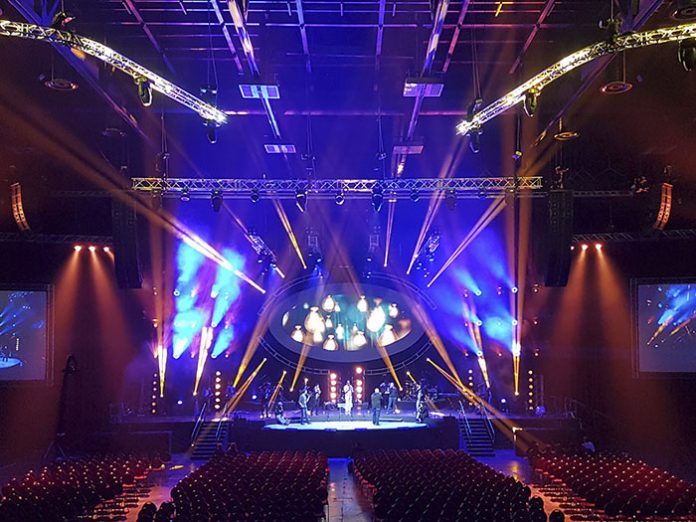 Robe Spiiders were used for the first time by Lighting Designer Alan Muller of FX Unlimited for the tri-annual Every Nation Conference at the 5000-capacity Grand West’s Grand Arena in Cape Town, South Africa. It was in fact the first live show in SA to use Robe’s brand new LED wash beam product launched last month.

The 12 Spiiders were part of a rig containing over 100 other Robe fixtures provided by technical suppliers C&S Audio who were working for event technical producers, Bad Weather Productions. Both companies are based in Cape Town.

Alan worked closely with Technical Production Manager Andrew Bosman from Bad Weather who produced the original stage designs and the video content with his team and Pierre Smith, production director of Every Nation Church Somerset West. The conference ran over four days, and that action at the Grand Arena included two speakers per day, worship sessions, live bands and performance plus activities for all delegates. It was streamed live and also recorded for a DVD, all of which had to be factored in for lighting, but as Alan observed, using six Robe BMFL WashBeams was a “pleasure.”

The creative brief for the stage design was to make the space intimate even though it is a large venue, so hanging a series of trusses at 45° accentuated the grandeur of the overall design and focussed attention on the main presentation area. Four over-stage trusses provided the main top-lighting positions with a symmetrical backlight design.

The design included a large ovular centre LED screen upstage flanked by three levels of LED strips rigged as truss borders left and right, finished with a pair of side screens – so there were multiple pixels for the lighting to work with and be harmonious. At the front of the stage was an ovular thrust mimicking the screen shape which was a cut-out of the Every Nation logo which was the main speaker / presenter position, and a great surface for taking gobo texturing that featured brilliantly on the overhead job shots.

The 12 Spiiders were initially intended to be used as side wash fill, but “their awesome tight beam” swayed Alan to use them as effects. “Even using them as LED rings – the pixels are mappable – they delivered so many lumens, and I loved the fact you can find the zoom sweet-spot where the pixel is perfectly focussed.” In addition to these, he used 12 BMFL Blades for top and back light, stage texturing and specials for strategic cues, keyed in over 16 LEDWash 300s. The six BMFL WashBeams were primary key lights, while six LEDWash 600s toned the set elements.

18 ColorSpot 700E AT’s were arranged in two squares either side of the oval LED screen and utilised for side texturing, with five ColorWash 700E AT’s providing low back light behind the band risers.

Six totem trusses upstage were loaded with bars of PAR 64’s and strobes for tungsten glows, chases and blinding moments, and 20 Pointes were used for multiple beam work and effects all over the stage. Over the audience were another 20 ColorSpot and ColorWash 700E ATs, profiles and LED blinders.

C&S Audio is headed by Donald Clark and strive to keep at the cutting edge of the industry. It was the first rental company in South Africa to invest in Robe moving lights and now has close to 300 Robe fixtures in their rental inventory, all delivered by Robe’s distributor, DWR.