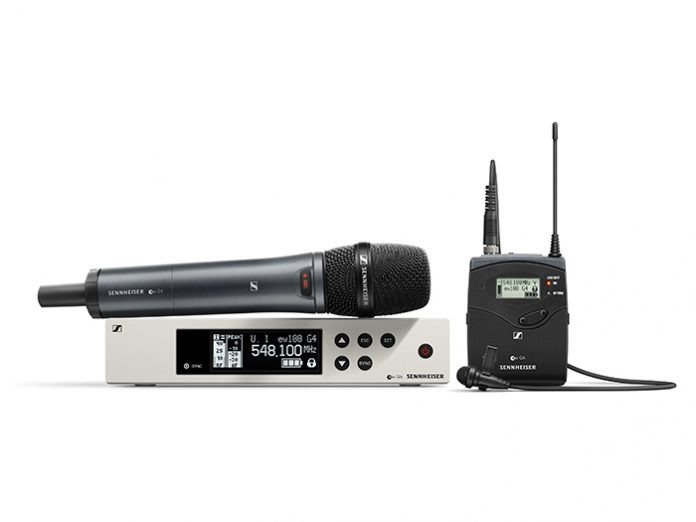 Sennheiser has launched evolution G4, the 4th generation of its most popular product family.

“Whether it is in the corporate world, live entertainment, theatre or broadcast, the evolution wireless series has long been the professional’s choice for the widest range of applications. We have set the precedent of introducing an ever-evolving feature set with each iteration and ew G4 is no exception. With many user-driven improvements and features, it is the culmination of 60 years of expertise in analogue wireless design,” said Mig Cardamone, Director of Sales and Marketing at Sennheiser Middle East.

There are brand-new professional sets for ENG and film work in the 500 series, 3 new Base Sets in the 300 series, as well as upgraded Vocal Sets and a new Combo Set in the 100 series.

The evolution wireless G4’s 100, 500 and IEM Series offer flexibility, versatility and easy setup, making them the ideal solution for live stage, house of worship and theatre applications. The 100 series comprises Vocal Sets that include the capsules of the evolution e 835, e 845, e 865, e 935, and e 945 microphones. Also available are an Instrument Set, a Headmic Set and 2 Lavalier Sets with either the ME 2-II (omni) or ME 4 (cardioid).

The ew G4 500 series offers the added benefits of greater range, more spectrum flexibility and the control options offered by the Wireless Systems Manager software. Available systems include Vocal Sets with e 935, e 945 and e 965 capsules, an Instrument Set, a Lavalier Set with professional MKE 2 clip-on, as well as individual receiver and transmitter units. The IEM series has had its RF output power increased to 50mW, and its bodypacks now come with better protection from humidity and moisture.

Targeting users in corporate, hospitality and education settings, the ew G4 300 series comprises a Vocal Set with an e 865 microphone head, a Lavalier Set with the ME 2-II clip-on, and a new Headmic Set which includes the SL HEADMIC 1. Also new in the series are the Base Sets, which provide a cost-efficient way to update or expand existing evolution wireless systems.

Sennheiser has coincided the launch of the ew G4 with the announcement of a new version of Sennheiser Control Cockpit. This software enables users to centrally and remotely control their wireless systems in real-time via a web browser on their smartphones, tablets or laptops. Sennheiser Cockpit Control will not only work with SpeechLine Digital Wireless and the new G4 systems but also with Digital 6000.