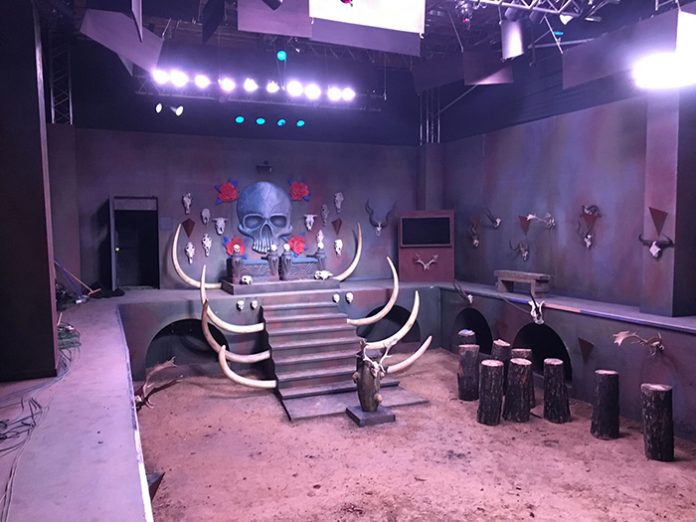 Specialising in television and reality series productions, Peter Rieck of Rieck’s Lighting in Johannesburg was appointed to supply all the lighting for Indian reality TV show, Skull and Roses, which was recently shot in South Africa’s Knysna Forest.

The convincing set was built by Sean Hoey of Dream Sets. A team from India were responsible for the basic soft lighting at Rose Island.

“The set looked very realistic,” said Rieck. “Between Sean and I, we created an elimination area. I put up the trussing while Sean and the Dream Sets team built a wooden structure around the truss.” The Indian production team wanted all lighting gear to have a low power consumption, thus utilizing LED as a lighting source.”

Rieck continued: “The set looked very realistic. Between Sean and I, we created an elimination area. I put up the trussing while Sean and the Dream Sets team built a wooden structure around the truss.”

The Indian production team wanted all lighting gear to have a low power consumption, thus utilising LED as a lighting source. “Because they wanted everything to be LED, we supplied 120 Longman F4 Ups, 30  Longman FacePars which lit up the perimeter of the prison, and 48 Longman Battons for back light, front light and the set dressing. To cleverly create ‘search lights’ from the four prison guard towers, 4 Robe Spiiders were utilised.”

In addition, 6 Robe Spikies created effects at the elimination area. For the finale, all lighting equipment was utilised to create a party look as the winners were announced. Control for the show was on an MA Lighting dot2 console. “I showed the operator from India how to get around the dot2, and while he had never been exposed to MA before, he took to it easily,” explained Rieck.

It was a lovely experience, both for Rieck’s Lighting and Dream Sets, to work with the international team. “They did things completely different to what we are used to, and they were very practical in making many of their own props and lighting adaptations,” continued Rieck. “As an example, where I would usually use a 2k light, they used an LED parcan, placing a LEE filter frost in front of the unit to diffuse it.  They would then take black cardboard and tape it around the LED to create a snoot after which each light would be focused.”

The crew worked long hours, the very first elimination ending at around 5 o’clock the next morning. “While language barriers stopped us from always understanding each other, we managed to create a great looking show.” And while Peter was not the lighting designer on the show, both he and Sean put in the added effort, in the end doubling up their services as both consultant and project manager. “We ended up being a support and helped to come up with joint plans. Together we all made it happen.”