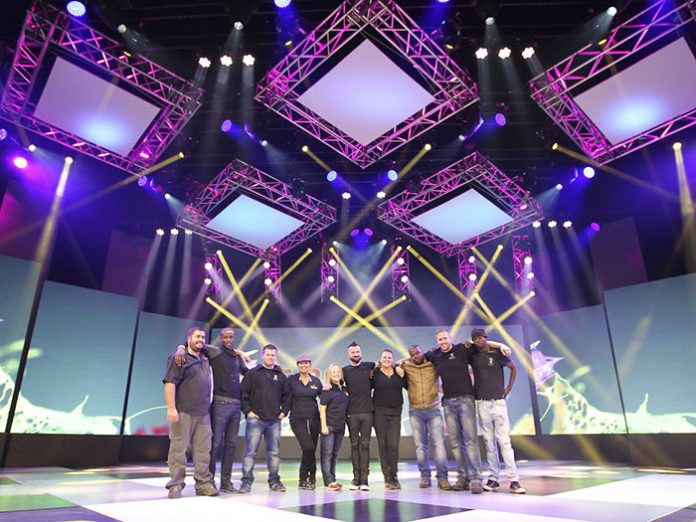 Sound Stylists supplied the full technical for South African comedian John Vlismas’ show, “Revelations II – The Good Racist” in Fourways, Johannesburg for two consecutive nights to a sold-out audience. The same set and gear was then used for the for the Savanna Comics’ Choice Awards the week thereafter.

“Lighting the show was a bit of a challenge for me as I’d never done a comedian act before,” admitted Lighting Designer Sean Crawley. “When I spoke to John Vlismas prior to the event, asking him what his vision was for the show, he said he was aiming to combine rock and roll with theatrical twist. He enjoys beams, but also required clean looks, and essentially wanted the stage to be lit up to have this big, live feel. I also had to ensure that the stage was lit appropriately for camera.”

The concept design was a team effort between Dave Handley from Stageworks (another sponsor of the event), and by Kevin Glover and Andrew Robertson of Sound Stylists. The show saw five diamond shaped boxes, made out of H40V trusses, hung at an angle above the stage. At the centre of each ‘diamond’ was a floating white canvas, suspended with steel rope from the grid, and used as a lighting surface. Custom designed content was produced for the 9.6m wide x 3.2m high 10mm LED screen which created the backdrop for the stage, as well as the 6 x 3.9mm smaller side screens, each being 2m wide and 3m high. All video content was run off Wings Servers.

The lighting rig included 18 Robe ColorWash 2500’s, 12 Robe ColorSpot 2500’s, 24 Robin 600 LEDWash, 32 Robe CitySkape 48, 32 Chauvet legend 230SR, six Chauvet Ovation Profiles, 28 Aryton WildBeam, 6 ADB Profile Fresnels and the use of H40V Prolyte. Control was on a High End Hog Full Boar 4 with playback wings. Pre-programming and pre-plotting was done using the visualiser on WYSIWIG (What You See Is What You Get), minimised the amount of plotting time required on site as majority of the work had already been done.

The Robe CitySkapes were hidden on either side of the stage wings as up-lighters for 6m high flats and were also used as truss toners in the ‘diamonds’ and to add colour to the white suspended diamond shaped canvases. Additional CitySkapes, hung from six totems above the main back screen, created beam work and created additional depth and height to the whole set.

The Robe ColorWash 2500’s were primarily used for camera work as the shows were filmed for Comedy Central. Gobo effects on the stage floor were created by the Robe ColorSpot 2500. Sean used the Robin 600 LEDWAsh to add colour and compliment the video material.

“Our team was awesome,” said Sean. “With Jo Metter as Project Manager, Sabello Mzizi as my Systems Tech, Rayne Ramsden on audio and Clinton Fowler on AV, we as team understood what had to be done to achieve optimum success for the show and we all enjoyed it. The best part of all was the running the show and seeing a mere drawing transformed into an actual production.”