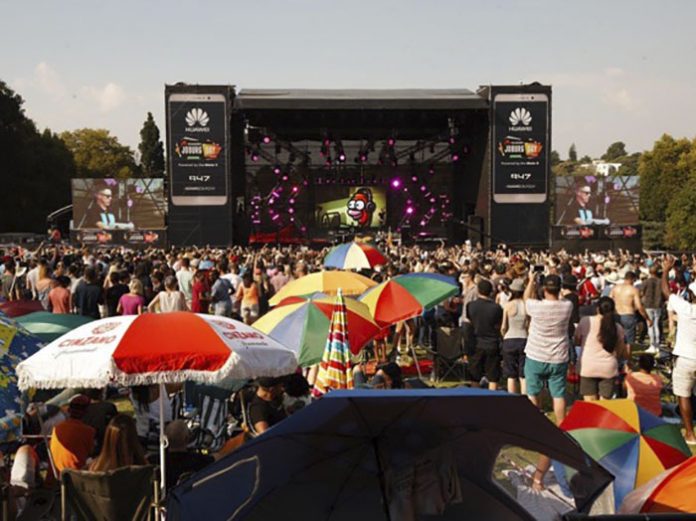 For South African music lovers, sound is critical and this year Sound Stylists came to the party with DiGiCo and were commissioned as the full technical suppliers of the event. The owner of Sound Stylists, Kevin Glover, is no stranger to Joburg Day and remembers the early days when the festival was hosted at Gold Reef City. with a capacity crowd of 2 500. “This year we supplied the full infrastructure from power to lighting, audio and screens,” said Colin Loock, Branch Manager at Sound Stylists.

Glover was looking after each of the band’s FOH engineers while Sound Engineer Shaun Hershel took care of the monitors on stage. Loock managed the stage with the rest of the team.

The sound included a DiGiCo SD10 which was used for monitors. “They were fantastic as always,” said Loock. “At FOH we had two SD8s, used between the different acts, with an S21 in the middle. We basically fed the two SD8s into the S21. All MC microphones and background music were run through the S21 to free up the SD8’s so that bands could come and do their pre-patching, line checks and load up their shows. It also meant that the engineers could add their own eq, effects and layout to their desk and thus giving peace of mind and far greater levels of comfort. Someone from our side was also always on hand to assist with any of their requirements.”

Each of the SD8’s ran a Digi Rack via an RME Madiface as the signal runs were just over 100M so BNC wasn’t really an option. The SD10 was running two SD Racks and all input signal was then fed through XTA DP8000’s. The SD10, therefore, had both band inputs and Hershel flip-flopped between them.

Ideally, it would always be nicer to have two monitor desks as well however this was impractical from a space point of view. With this arrangement, it gave each of the engineers the ability to run their own gain structures without having to affect anyone else. It also allowed the upcoming band the opportunity to do line checks prior to their set. The aim was to have as short a turnaround as possible in order to allow the band the maximum set time.

A Digico D Rack was then used on stage to distribute the various audio signals to the main PA, frontfills, delays and out hangs through the matrix on the S21. Two sets of backline were also provided in order to achieve this so while the one band was playing, the second band was setting up and getting comfortable on the gear.

Emmarentia Dam is within a residential area, and with this in mind, Sound Stylists had to comply to keep within the dB levels. “DiGiCo helped from a control point of view,” added Loock. “It worked fantastically because we had our main hangs, outfills, frontfills and delays all controlled from DiGiCo’s powerful matrix system.”

One thing that really impressed the crew was the quality of the audio that was achieved through the S21. “It was the first time I had really had the chance to dig into the guts of the desk and the features, flow and ease of operation really stood out.” concluded Glover.

The show ran flawlessly and the band’s engineers really loved working on the system.