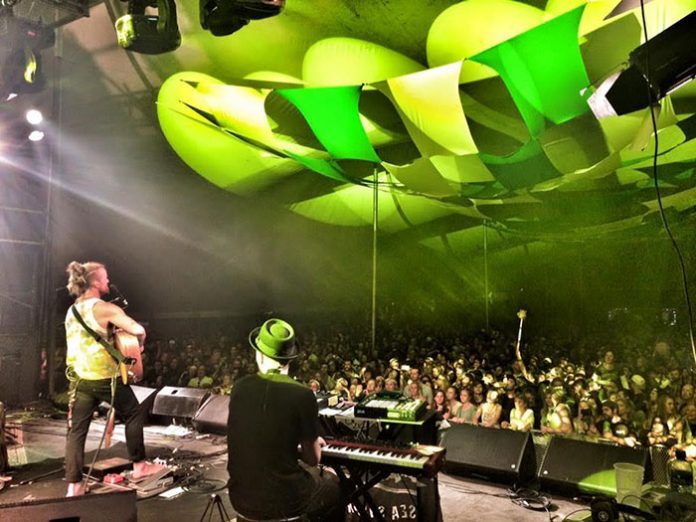 The Splashy Fen Festival is aptly named. Starting on a trout farm in the spring of 1990, South Africa’s longest running music festival serves up giant helpings of outdoor fun in and out of the water for thousands of visitors every year. There are also arts, crafts, games and, of course, plenty of music, from folk, rock, and techno, to mbaqanga (the up-tempo jive music of the townships), and the wonderfully distinctive Zulu style of isicanthamiya.

Over 1,500 different groups have performed on the Splashy stage over the past quarter century. This year, the venerable festival got a bold new look, courtesy of a dynamic contemporary main stage lighting design by Shaniel Laloo that was anchored by Strike 4, Rogue R2 Wash and Legend 230SR Beam fixtures from Chauvet Professional.

“The festival has been an institution with a loyal following – everyone loves its relaxed atmosphere and diverse music,” said Laloo. “My goal with the lighting design was to preserve the character of the festival while giving it an updated look. I also wanted a design that was flexible enough to work with the diverse range of artists on stage.”

Laloo accomplished this by coupling the intense output of the Strike 4 LED multi formatted warm white fixture with the colour rendering capabilities of the Rogue R2 Wash and Legend 230SR Beam. He flew all of these fixtures on an overhead truss grid that covered the top of the main stage.

“I had seven Strikes on the back, two over the middle and three right in the front,” he said. “I pixel mapped the Strikes – nothing very hectic, just simple starry images in keeping with the general mood of the festival. The Strikes created really inviting warm white effects when run at low intensity, giving me a very mellow look.”

At other times Laloo cranked up the high-output fixtures, covering the entire stage with intense light and filling the audience area with a bright glow. Since most of this area was under a very large tent, the impact of the full blast Strike 4s was amplified.

The six Rogue R2 Washes in Laloo’s rig were positioned in the middle of the overhead truss structure, where they played off the beams of the Legend fixtures next to them. Used to wash the stage in a rainbow of colours that reflected the diverse acts on stage, the Rogues provided the versatility that the LD was seeking for this eclectic festival.

“I like the Rogue R2 Washes for their rich colors,” said Laloo. “They worked great as eye candy. Plus, playing them off against the beams added depth to the stage.”

Laloo also used his beams and washes to accent the varied geometric fabrications that formed a captivating scenic element over the audience area. Glowing with the varied colours of light that hit them, the fabrications created a sense of depth and motion to the area inside the tent. Adding to the immersive atmosphere was the richly coloured light from 20 COLORado 1-Tri Tours that were used as truss warmers.

“I think we created an atmosphere that did the festival justice,” said Laloo.

An institution in South Africa, the Splashy Fen Festival reflects the energy and diversity of the vibrant nation in its music – and now it does in its main stage light show as well.