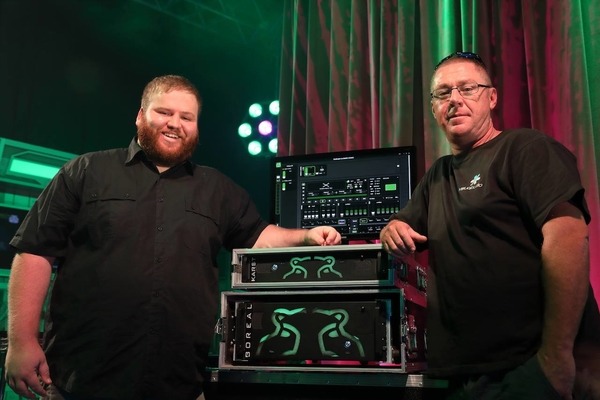 “I love animals. The more Hippos the merrier! But in all earnestness, I don’t always need a big Hippotizer such as the Boreal and the Karst’s greatest selling point is flexibility. Now I have the best of both worlds,” said Van Der Bergh.

DWR’s Dylan Jones added: “Staal can send out the Karst on an extra show, he can work on large productions using both the Karst and the Boreal, or he can do a smaller show with just the Karst.” In addition, the unit can also be rented out for dry hire.

“The main attributing feature is a 4k Output which can be split into more outputs if needed,” Jones commented. “Because the Hippotizers work together, you can plug a network cable over HippoNet, which will connect the two servers and create 6 outputs.”

The Karst offers unparalleled power built into a custom, tour-ready case. The product benefits include 2 DVI or HD-SDI outputs, 1 DisplayPort 1.2 output (which supports 4K), 1 optional internal capture card with an optional Genlock. A total of 4 codecs are available in Media Manager’s Encoding settings to ensure that media is played instantly, smoothly and accurately.

Van Der Bergh was among the first Green Hippo users in South Africa, recently deploying 81 video starts in 3 hours at the Adcock Ingram Awards Evening, including 60 video starts at the APEX Awards, before creating 6 masks to make a scene at the Young Community Shapers Awards.

“It’s all Chris Bolton from Keystone Production’s fault,” Van Der Bergh recalled. “Together we went to the very first Green Hippo demo in South Africa. Chris was the first in SA to invest in Green Hippo but Staal was not far behind, purchasing the entry level 2 channel Hippotizer Chipmunk and within 18 months upgrading to the V3, the Boreal Media Server and now purchasing the Karst.

“The nice thing about Green Hippo is that I don’t need to have the content when programming because I programme per slot number. I can pre-program the entire show at my office and when the client brings me the content with the list of where the videos must go, I simply import then drag and drop. This video goes to slot 1, this one to slot 2, the next to slot 3, and before I know it, I’m done. You still trigger like a cue, and essentially the slots are your gobo slots. With Hippotizer you can just press Delete, replace the content and it’s done,” he explained.

VisualAudio Productions was established in 2007, supplying sound, lighting and rental companies. “When I look at the level of shows I used to do and the shows I do now, there’s a great improvement,” Van Der Bergh concluded.