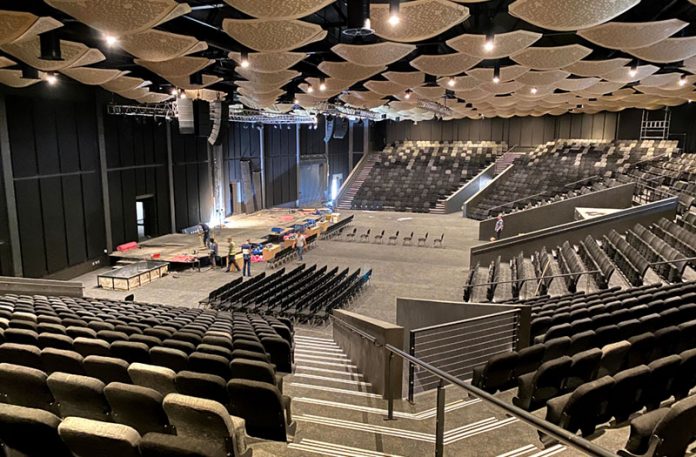 Stage Audio Works (SAW) has provided a comprehensive audio-visual solution for the brand-new Capital City Church International (3Ci) in Pretoria, South Africa. Involved in the process from the early stages, SAW played a large part in the planning and execution of the project – delivering a comprehensive PA system based on state-of-the-art d&b audiotechnik line array speakers, as well as a turnkey house lighting system and building-wide BGM and control.

One of the primary considerations was audio clarity in the main auditorium, a large space with a maximum capacity of 2,500. Naturally, ensuring sound constancy in such a large space proved challenging, but the excellent collaboration between SAW, 3Ci, the architect, Ferdi Le Grange, as well as acoustician Bruce Gessner resulted in a stellar audio solution.

The goal was to design a space that was intimate and functional, with no disparity between seats. To achieve audio consistency in such a large space, acoustics were a key consideration. “We recommended that 3Ci bring in Bruce Gessner from AcousticWorx to develop a bespoke turnkey acoustics design and treatment plan,” said SAW CTO, Nathan Ihlenfeldt. “This resulted in an immaculate sound environment boasting a sub 1.2-second reverb as well as excellent intelligibility.”

SAW did justice to these stellar acoustics by designing a PA system which would fill the room. The size of the space warranted a line array system, so SAW opted for a d&b audiotechnik Y-Series main system comprising L/R hangs of eight Y8s/Y12s (four of each per hang) supported by outfill arrays of six 10ALs on either side of the stage. The low end was handled by three flown 27A-SUBs per side combined with a ground sub array of six 21S-SUBs. The setup is completed by eight 8S loudspeakers that serve as front fills. The entire system is powered by d&b 30D amplifiers, and input is controlled via a Yamaha CL5 console. 3Ci worship Director, Damian Phillips was thrilled with the result: “What we really love about this venue is that there are no bad seats in the house. There is an even spread of sound wherever you go.”

SAW also provided 3Ci with a building-wide BGM system using a mixture of AUDAC and QSC surface and ceiling speakers that seamlessly fill the areas outside of the auditorium. The system can also output audio from the auditorium, fostering an inclusive atmosphere enabling attendees elsewhere in the building to listen to the service even if they can’t actually be in the auditorium. A range of Attero Tech Bluetooth panels and SAW’s proprietary Windows POE touch panels running on Q-SYS provide easy and intuitive local media playback and control.

Architect Ferdi Le Grange was particularly impressed by how easy it was to work with SAW: “They weren’t just the consultants or a service provider; they were a collaborator from the beginning of the project. Together, we crafted a solution to provide 3Ci with an intimate worship and preaching environment.”

“Stage Audio Works delivered great sound in the auditorium and throughout,” he continued. “As well as a cutting-edge RGBW house light solution and a building management system, which really ties a number of trades together in the venue.”

3Ci’s Elder, Eugene Smith, praised SAW for its role in conceptualising and realising the project: “The experience was brilliant,” he confirmed. “The quality of the holistic product delivered is simply amazing. The sound, the lighting and the acoustics all combine to create a truly intimate worship experience despite the size of the auditorium – everyone feels involved.” He continued: “People are impacted. When they walk in, they see excellence. It’s far beyond anything we’d dreamt of.”