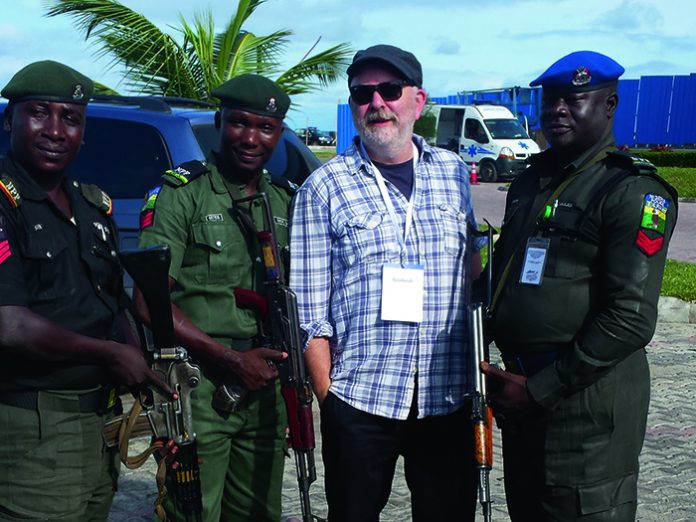 When video director Steve Price was offered a job in Nigeria, he saw it as the perfect chance to add another destination to his cv. The ensuing job was certainly a memorable one, including the chance to oversee an event for one of the world’s richest men, Facebook founder, Mark Zuckerberg. TPMEA’s Kelly Murray talked to Price to find out more…

How did you get into the concert / live event touring industry?

I spent 15 years directing music videos, all on film, for a variety of British artists throughout the ‘90s and early 2000s, then suddenly the whole world went digital one weekend in 2004 and the entire industry collapsed, pretty much overnight!  There I was, walking down Oxford Street kicking my heels, when I bumped into a friend of mine called Matt Dowden, who was the drummer in my first demo video in 1993. I hadn’t seen him for years and it turned out he was a lighting director now working with a new band called Razorlight… They were about to do an in-store gig at HMV.

I went in, saw the band, said hello to a couple of people and left. Shortly after, Razorlight played at Alexandra Palace and needed a video director for the screens, so Matt called me up and asked me if I’d like to direct it (under the impression I’d done it before). I basically blagged my way through it and it went really well – within a few months I was working for the Arctic Monkeys and Faithless, thanks to the support of Razorlight’s Tour Manager, Kumar Kamalagharan and Pod Bluman of Bluman Associates (their video supplier).

I was with Razorlight for four years and I learned to do the job by doing the job. If I hadn’t bumped into Matt that day I have no idea what I’d be doing these days. I was 41 when that happened, I’m 52 now so this industry came to me late in life but I’m very grateful for it.

What does your usual role as a video director involve?

It’s changed over the years. It used to be simply cutting cameras to IMAG screens, but as the technology has developed and LED has become so integral to the design of most shows, I now get involved in everything from content creation to DVD directing. Video and lighting are so integrated now that I usually work very closely with the LD to compliment and enhance their overall design for the show. A good example of this is the design of the Queen + Adam Lambert tour – my mix goes to a massive circular screen upstage centre and so it’s integral to the look of the show. I’ve been working on it for over two years now and Rob Sinclair, their LD, has really pushed me hard to stay on my toes and work on the finest details, constantly evolving and improving the video design to maximise the impact of his lighting and the band’s performance. Rob has taught me an awful lot, I’ve learnt more from him than anyone else I’ve worked with along the way.

Can you tell us about your recent work in Lagos?

I got a call from Creative Technology (CT) offering some work for a few days on a corporate job in Lagos. I accepted it straight away, mainly because it was in Nigeria and I’d never been there before. A couple of days later CT called me back to say the client had decided to use a local video supplier, but still wanted to take a director, and there was just enough time to get my visa sorted. All I knew was that it was a job for Facebook, through London based creative agency Clive. I was to utilise four cameras and it was scheduled to last for an hour, with two days of rehearsals. It actually turned out to be a Q&A with Mark Zuckerberg and an audience of Nigerian web developers! Although I didn’t find this out until a few hours before kick off, for security reasons. The audience had no idea Zuckerberg was coming until he walked onto the stage, their reaction was pretty impressive – it was quite a party atmosphere.

Did this project pose any challenges?

I met the Producer, Neal Rawlings, and discovered we’d worked together a few years ago on the Carphone Warehouse Christmas party at ExCeL in London when I was hired to direct a performance by N-Dubz. He’s a great guy and knows Nigeria well, having been there over 40 times in the last couple of years. His knowledge and experience of Lagos was exceptional. It’s not the easiest of places to get a grip on and his advice about how to work with the local suppliers was invaluable. However, the nature of this particular job – with Zuckerberg being kept secret – meant that rehearsals never actually materialised, so I used the time to get to know our local vendors.

The video guys were keen, helpful and hard working, and even though the equipment was quite basic it was adequate for the job. When I asked to meet the LD, I was told there wasn’t one! I was then asked if I’d like to get involved with that myself…. I ended up lighting the show as well as directing the cameras.

The video coverage was streamed live to an invited corporate audience across the world and went as well as could be expected without any rehearsals – everyone was overjoyed with it by the end. Also, a team of Facebook executives arrived the evening before the show and ripped out the stage, so Zuckerberg was no longer restricted to the space I’d positioned my cameras around. He kept walking into the audience to shake hands and hug the people asking questions, so my experience of shooting rock shows came into its own with me having to chase the live action all over the place! It kept me on my toes for sure.

Did you have any highlights from the event?

I was picked up from the airport by a local production manager, two drivers and three heavily armed guards. It was quite handy on the way back to the airport when the brakes on our vehicle caught fire and we all jumped out into the road. Men with assault rifles make effective motorway traffic police as it turns out!

You’ve obviously travelled all of the world for your job but this was your first time in Nigeria, how did you find the experience?

I took the job mainly so I could get a taste of Nigeria, albeit for just three days. It was an education – I wouldn’t say it’s the easiest place to work but it is heading in the right direction. For me, the most memorable part of this job was when a woman thanked Zuckerberg for coming to Nigeria, explaining that many people think South Africa is the only advanced country worth doing business with on the African continent, when in fact they should be looking towards development of Nigeria for the future of Africa. She got such a massive cheer from the crowd. I truly hope Nigeria’s future is a bright one.