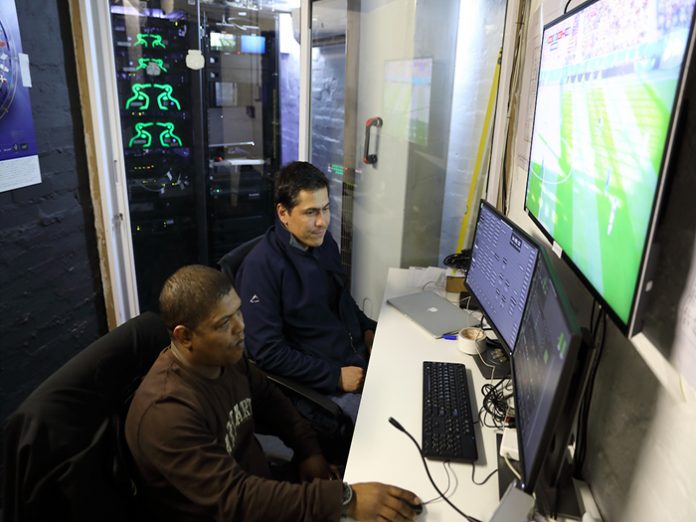 The studio owners called upon the expertise of Gearhouse LEDVision to design and programme a brand-new system that would operate 176 x 46″ full HD seamless monitors, 144 x 1.5mm LED tiles and 130 x 3.9mm LED tiles in the revamped studio.

“Basically, I sat for a couple of weekends with my whole dining room table covered with bits of paper with all the screens on it,” said Chris Grandin. The screens would be moved around, as Grandin did little schematics, getting an idea of what could possibly work.

“Then you would come back to the studio, do some tests and realize you were wrong. You would go back a little, go forward and ultimately end up with a system that works. And when you thought you had it right, you would find something else wrong and fix that! But how do you eat a hippo? One bite at a time.”

With the design complete, Mike Tempest was brought in to program and prepare all the groundwork and was responsible for the handover. “There is a lot Hippotizer Media Servers can do that a lot of other servers can’t,” explained Tempest.

“You can operate it manually which is really nice because it gives you that kind of VJ randomly accessible mode of operation. When a more advanced look needs to be recalled, you can have a timeline with hundreds and hundreds of separate keyframes on it, giving you precise control of things that you can animate simultaneously. It mixes both worlds of freestyle and timeline control styles very well as certain controls can be animated from the timeline, while operating as a manually controlled system.

Working on the Green Hippo Hippotizer platform on the project was as a bit of a learning curve for Tempest, but he says it was a fun experience, which included training presented by Green Hippo’s Product Specialist, Suzy Stenning, hosted at DWR Distribution.

“It’s actually quite an intuitive system to get your head around,” said Tempest. “Obviously if you come from a media and server background it’s easy to learn. If you don’t know anything about servers, it can be daunting because Hippotizer is so powerful. It has a funny knack of being logically laid out and there are many control possibilities.”

Dylan Jones from DWR played a supportive role during the implementation of the Green Hippo system as a whole. “Working with Mike and Chris on this project has been an incredible learning experience,” said Jones. “The training by Suzy just before the install was crucial to the success during the World Cup. My knowledge of timelines and the programming power of the Hippotizer Media Servers has dramatically increased.”

Tempest created Action Mapping buttons to control different parameters. For example, when presenters in studio talked about a game, mixed layers of country flags would appear at the touch of a button, while a separate button could be pressed to mix out when going to the next game. “It’s nice in that sense – you have to think about what you are trying to do and what you are trying to control at any given point and then programme it accordingly.  We can change the whole studio look at the touch of a button,” he added.

“What’s really nice is the way the timeline structure is laid out. You can go in and take a snapshot of whatever is in that timeline as a global event, and all the features get saved there, or, you can filter it down so that only certain components have a change made or recorded. As with any system, there are a couple of things that could be worked on, but all of these systems are cutting edge – we always live on the edge of AV, but this project has been a good challenge.”