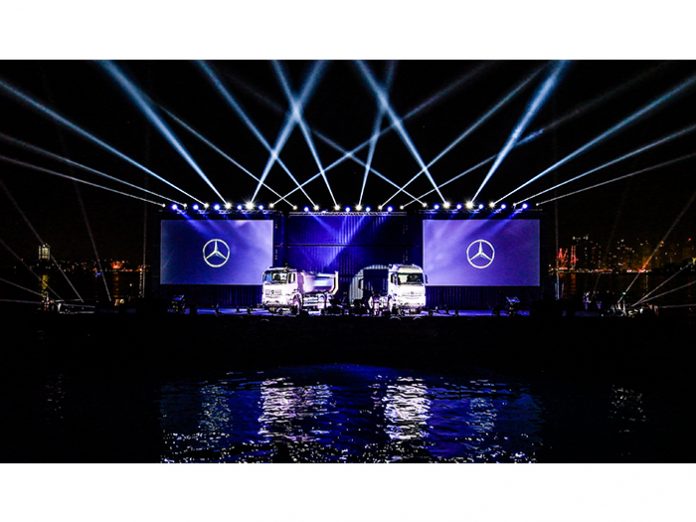 The new Mercedes-Benz Actros and Arocs trucks launched in the Middle East and Africa in magnificent style with Germany-based tarm Showlaser.

The regional launch of the new generation of heavy-duty trucks – the new Mercedes-Benz Actros and Arocs – was celebrated in an evening of extraordinary style in the sea, just off the Dubai Marina and Jumeirah Beach Residences on 7 March 2018.

Attended by more than 300 VIP customers and media from the Middle East and Africa, and hosted by Daimler’s Commercial Vehicles Regional Office, the dramatic reveal of the new models included a stunning off-shore laser show display in proximity to Dubai’s new iconic Dubai Eye Ferris Wheel.

Within just 8 days tarm Showlaser’s team created this striking show with a total of 10 sophisticated high-power full-colour laser projectors and a 360-degree smoke-installation with a total of 18 fog/haze-generators with a fan.

tarm Showlaser’s Managing Director Ralf Lottig about this result: “We only had one single night for rehearsal in Dubai and in such a case only a very thorough preparation is the key to success. So we visualised the whole show in our studios under realistic conditions in 3D.”