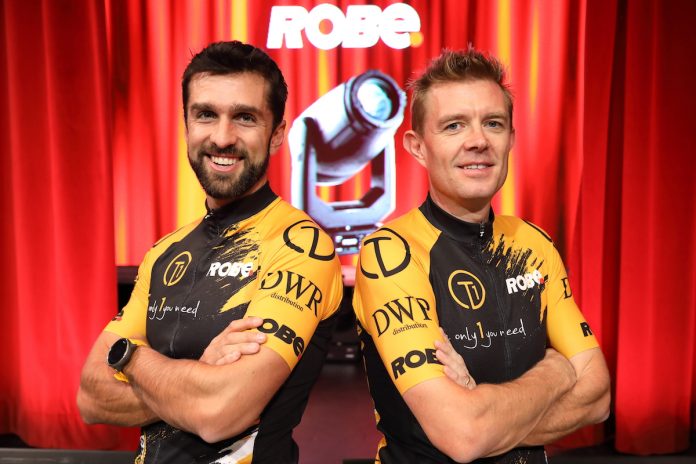 Team Robe T1, consisting of Paul Newman of Lucidity Technical Production Services and Mike Hewan, a seasoned pro, will be competing in the 16th edition of the Absa Cape Epic challenge hosted from 17 to 24 March. Both local and international mountain bikers will confront the tough eight-day adventure through the Western Cape Region in South Africa.

For the third consecutive year, Robe Lighting and DWR Distribution have stepped in as sponsors, the team named after the innovative T1 series of LED bases moving lights, a fixture that can be used for theatre, television and touring applications and also be connected to the innovative Robe RoboSpot remote follow spotting system.

This will be Paul Newman’s third Epic. “Once you’ve completed three Epics you join an exclusive club called Amabubesi,” chuckles Paul. Amabubesi means “pride of lions” in Zulu and it couldn’t be a better portrayal for the hardy breed of riders who tackle the Absa Cape Epic repeatedly.

As the owner of Lucidity, a busy Johannesburg based technical supplier, a drawcard for Paul is to get out on his bicycle and leave life’s troubles behind, even for just a few hours. “We all need something to keep us from going mad in this industry and cycling keeps me grounded,” he said.

Paul, and his riding partner Mike Hewan, marketing manager for Technogym Southern Africa will form part of 650 teams who will look forward to some 700 kilometres of unspoilt the scenery and 15 000m of accumulated climbing as they participate in the only eight-day mountain bike stage race classed as hors catégorie by the Union Cycliste Internationale (UCI), a highlight on the professional racer’s calendar.

“This race can and will throw everything at you which is what makes it the toughest MTB race in the world,” said Paul. “I will be happy to finish this race with a smile on my face after eight demanding and brutal days.”

Team Robe T1 are grateful to Josef Valchar from Robe Lighting and DWR, who have taken a keen interest in this sport and who have invested in the form of sponsorship. “There are a lot of strong cyclists in our industry and it’s great that Robe and DWR recognize this and support their customer base as we support them,” said Paul. “The ABSA Cape Epic is the world’s toughest and most iconic mountain bike race and so it’s only fitting that brands like Robe and DWR are involved.”

DWR’s Robert Izzett, who himself competed as Team Robe MegaPointe in last year’s Cape Epic, is super excited to be part of the event again. “We wish Paul and Mike everything of the best,” said Rob. “Keep the rubber side down!”

In closing, Paul offered his personal philosophy, “Consider a wheel with three spokes,” he smiles. “Family, work and cycling. You need to make sure that all of these are nicely balanced otherwise the wheel is going to buckle and damage the other two spokes.”