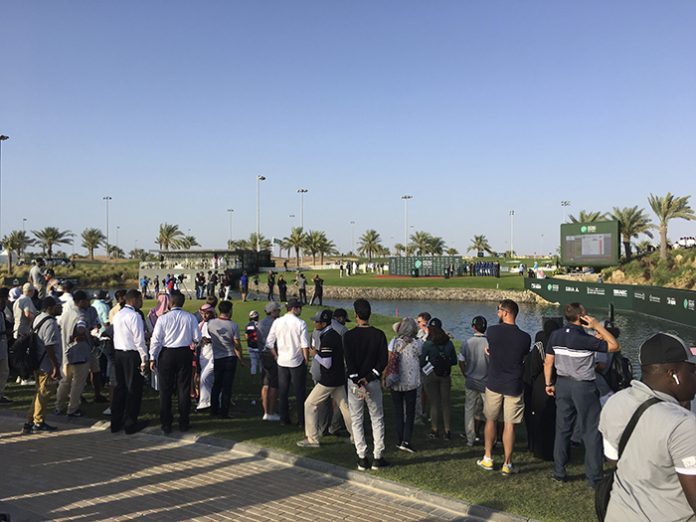 The European Tour made history this year when it took its tournament to Saudi Arabia for the first time in its 47 years of running. The groundbreaking event took place at the Royal Greens golf course in King Abdullah Economic City on the 31st January and ran until the 3rd of February.  The Inaugural Saudi International was not only a first of its kind, but it was also the first time any Saudi Arabian National had participated in a European Tour event. The tournament made headlines worldwide as the event was set to make a big impact.

Creative Technology (CT) were on hand to deliver all video aspects of this historical event on behalf of our client European Tour and IMG.

The complete design and engineering service provided by CT not only included the design for each LED structure but also the foundations. The physical structure fabrication process was split across the CT group, and once delivered to site CT also installed and then subsequently de-rigged each structure.

Purkess added: “We selected the 5mm high end black face outdoor LED as it gave the best resolution for the 3m x 3m Leaderboards. It is a great product and ideal for outdoor viewing in direct sunlight.”

CT was involved in developing the concept for the leaderboard / scoreboard structures and the graphics shown on all LED and TVs. Purkess went on to say: “Building on our Scoring presentation system Mercury Sport, we were able to create bespoke Leaderboard and Scoreboard graphics which allowed the spectators and officials to keep abreast of the scores while following the action around the course.”

In the media centre, CT provided a 21sqm A3 Pro indoor screen to allow the press to follow the action in real time and 32 IP TVs ranging from 22” – 65” were strategically placed in various locations. The TVs were used to display CT’s customised Tournament Television Programme (TTV) comprising of live feeds, highlights, interviews, scoring, player information, stats, social media and sponsor advertising. Purkess added: “All TVs were either wall mounted or placed on the custom built TV stands that CT had manufactured specifically for the golf event.”

CT’s account manager, Richard Smith expressed: “CT has been working alongside The European Tour and IMG to help deliver all video aspects of their tournaments for 10 years. It is thrilling to work on these world-renowned events and always a pleasure to work alongside our clients, bringing their vision to life. The first Saudi International tournament has been fantastic, and we at CT are proud to have been part of such a historical event.