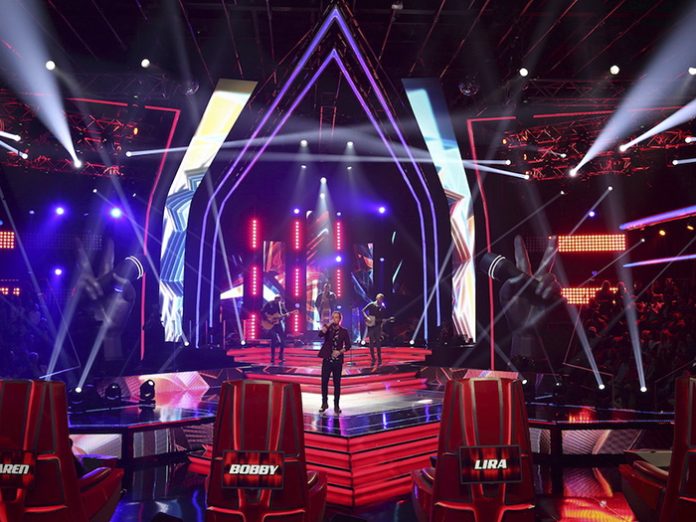 When the television audience heard that The Voice would come to South Africa, there was a huge response and expectation. For Chris De Lancey from Multi-Media who was awarded the technical supply for The Voice Angola by production Co AMPN, South Africa and Nigeria, it has been a tremendous relief to see the show raise the bar for local televised shows and to meet international standards. The show was recorded at Sasani Studios, Johannesburg.

“First tentative discussions around The Voice began late in 2013, and December of that year, draft one budgets were being produced. Two years later it was on us,” said De Lancey.

“When I eventually got sign off I was both elated and terrified at the same time,” he added. “I don’t think I slept for four days before I could speak to anyone and say, ‘Right, lets start talking and dealing with this.’

Realising the scale of the task at hand, and that lighting was such a key component of a show this nature, putting together a like minded team of people together to do the show justice was paramount. Joshua Cutts was appointed lighting designer, and after a pitch process, Dewet Meyer of JDM Unlimited was appointed set designer. Multi-Media’s Auriot Booyes was appointed head of audio, which was obviously an integral part of the show. He also backed up as assistant project manager to De Lancey.

With the backing of the rest of the team from Multi-Media, the planning process began in earnest.

“It was an enormous relief when Josh said he was available to do this thing. I knew obviously that we would be getting one of the best lighting guys in the country but I also knew it would be taking a lot of pressure off me – despite the fact that working with one of the countries tops lighting designers for the first time was quite daunting. It proved to be a very symbiotic relationship,” he said.

“I think the biggest learning we had, and the essence of what The Voice is all about, came from Mauritz Briet who is the Dutch consultant from Talpa. At the beginning of the production he came through at the start of each element, namely the Blinds, the Battle and the Live performances. When he first walked in at the beginning of the Angola Blinds, the first country we did, he looked at this lighting rig and said, ‘This is fantastic, there’s way too much, cut it down.’”

De Lancey and Cutts battled to understand this for a while. They were trying to create something spectacular and now had to pin it down to a basic lighting rig. But there was a formulae, starting off small for the Blinds in an intimate theatre environment, growing it slightly for the Battles and then allowing head room for the Live show. This format, which has now run for the past nine months, sees the studio turned around equipment wise every six weeks or so to accommodate the next phase of each countries’ recording. Each country also has it’s own director, music director and personal stamp.

The musical director on the South African show was James Bassingthwaighte, and he and Josh are the pioneers of the use of timecode in South Africa. “James and I worked very closely together,” said Cutts. “I did a lot of the groundwork for timecode and how to implement it very quickly on The Voice. Timecode is almost like the nervous system of the show, without it, it wouldn’t work. It allows me more precision for all my cues and I’m not afraid of a zero type cue time.”

Cutts’ right hand man was Andre Siebrits from Visual Frontier, who played a big role in assisting with timecode and programming. Multi-Media also added crew to the production to gain experience and be part of this massive learning opportunity.

“We obviously had to put together a big lighting system,” Cutts continued. He also chatted to the designer from The Voice Holland: “I had some input from him, we had a few discussions about what I might be able to do to enhance the definition of the theatrics of the whole show and maybe use some of his style of lighting from Holland to South Africa if we needed to.

“My vision was to pixel map as always. I needed big fixtures with large RGB pixel counts in them, so hence I wanted to try Robe Robin CycFX 8s for the first time as a back wall feature. I used Robin LEDBeam 100s between the pixels. A big thing I found in the American Voice in particular is that they use a 5×5 pixel panel of lighting. We have a similar product in our country called the Elation Cuepix. It allowed me to have a high count of pixels in a small area through connecting all these panels together.” Video ran over the entire lighting rig to compliment the video currently running on the screens.

As the studio is relatively small, Cutts used Robin Pointes for sharp, hard beams or he would zoom out for gobo work. The workhorses, Robin LEDWash 600s, created a blanket was of colour over the space and audience. There were also LED PARS and LED battens.

Front lighting was a challenge as the set and ceiling design were not suited for followspots. Generic front washes were originally used but these fixtures did not give the dynamics to go up and down on stage. “It was generally a focussed instrument that I couldn’t move and manipulate based on each song. We weren’t getting the black levels we wanted in the room and it wasn’t creating the definition and depth we wanted. It wasn’t theatrical enough.”

Cutts opted instead for Robe BMFL Blades. “I only use four BMFL Blades from the front for about 80% of my key lights,” he explained. “What’s interesting is I tried to use them as programmable followspots so I continually move them around the stage within cues of the song to almost follow the performer from one side of the stage to the other. Two BMFLs are used to wash the entire stage. Then I cut them down to where the performer is. I cut the stage out, and when the performers move, all I do is open the blades. If they go left, I’ll open the left blade, if they move to the right, I’ll open the right blade. That way I’m not changing the intensity of lighting. They are going at 100% and it’s working.”

Vuepix E Series panels were used for the screen. “We started off on the Blinds with 50 panels,” explained De Lancey. “In the ‘battles’ the floor stuff stays and we add side screen to about 100 panels which are mainly used for the team names. For the Live show we go up to 200 panels. Those are all on Q7 controllers.”

There was approximately two km of RGB LED strips as the set had to switch on and off. “The set needs to be able to disappear, reappear and change colour and adapt based on the performances,” said De Lancey. “ It is also the most hateful element of the show (he smiles). And we are constantly rerouting. I think we have 98 DMX controllers and power supplies.”

Dewet Meyer was given the set design aspect of the project. He developed items such as the large hand with mic set piece by seeing info on youtube, putting this into a 3D drawing and then sending the details off to Cape Town to be lazer cut. Once the base of the timber hand had been created, it was sent back to Johannesburg to be fibre glassed and painted.

Meyer also made the signature ‘turn around’ chairs. “We initially spoke to Nick Britz from DWR Distribution in connection with systems in general and then also in connection to the chairs and how to automate them,” said Cutts. “There’s a feature on the MA which has a 16 pin connector on the back, which allows you 15 inputs from a switch device. So we turned the chairs into little switches and sent a switch command to the MA that triggered a Macro. It was a big unknown. International shows saw computer software operating the chairs, but in South Africa there was no access to that in the time that we had. So we realized that the input manual trigger switch on the MA with a DC control from the back of the chair would be the simplest and easiest way to control it.”

The Voice has been a privilege for the pair to be part of. “The Voice really focusses on the talent. You can’t call them contestants, you call them talent, there are no judges – there are coaches,” De Lancey elaborated. “There’s a lot of work that goes on behind the scenes to find this talent. The Voice is a very specific brand. It needs to look a certain way, it needs to feel a certain way and the full production team’s attention to detail is considerable.

“I think the thought process behind it is they’ve spent a considerable amount of time finding decent talent, and then when they get them here, they’re not just judging to see how well they can sing. They coach them quite heavily, they teach them how to sing, to use the stage, to use a mic. That’s the ethos. It’s not just a talent show with one winner. Everyone who leaves this place must feel that they’ve gained something from it. A constant thing I hear people talk about, and the one thing they really appreciate, is that the coaches are not derogatory about the performance at all. The coaches are very nurturing, it’s a very positive environment that they try and create.”