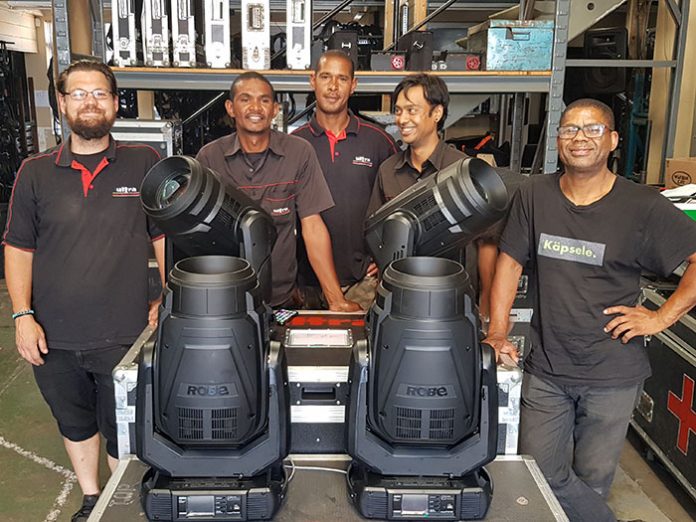 Ultra Events is a premium technical supply and production company based in Cape Town, South Africa, owned and run by Costa Champanis, the latest in several rental companies in the region to invest in Robe’s hugely popular MegaPointe multi-functional luminaire.

Natural expansion led it to look at supplying full technical packages and design as needed to clients, so investments followed in lighting, video, staging and structures and sets, and with this, Ultra Events was founded to supply integrated and imaginative solutions to a diverse client base. It covers all types of events, projects for the film, television and advertising industries and theatre productions.

Right from the start Champanis was aware of the kudos and perception that investing in internationally known and recognised brands would bring, and this philosophy led him to Robe as they purchased washes – both LEDWashes and the original ColorWash discharge series – and more recently Pointes.

Immediately the Pointes were onboard, the demand was so great that they upped the initial four units to 24 in less than a year.

Based on its success with the Pointes and the intense demand on riders for MegaPointes, they ordered these from South African distributor, DWR.

Ultra Events is active all over Africa, however it’s still very important to stay ahead of the game in the highly competitive local market in and around Cape Town. So, the increasing requests for MegaPointes, and the fact that Champanis and the team like to have popular kit in stock rather than cross hire, fuelled the investment.

The first event for the new MegaPointes was lighting the runway show for the two-day #COSMOFest2018 fashion extravaganza, staged at Canal Walk Shopping Centre, Cape Town. Lighting Designer JP Wilson integrated them with the rest of the lighting at the entrance end of the runway, where they were rigged to the sides of a trussing border running around a large LED screen.

Asked about the feedback, Champanis noted that: “They are bright beyond belief and hugely powerful, yet with the finesse of a fine feather. With the rugged build, and such compact dimensions, the sky is the limit for this small monster of a light!”

He feels that in a world of very few independently owned lighting companies, Robe is really listening to what the market is wanting and needing … and responding with appropriate products. He added that DWR’s superlative service – something we hear repeated constantly – is also “extremely important! Half the sale is that you get that DWR support … and half is the actual product itself,” he declared.