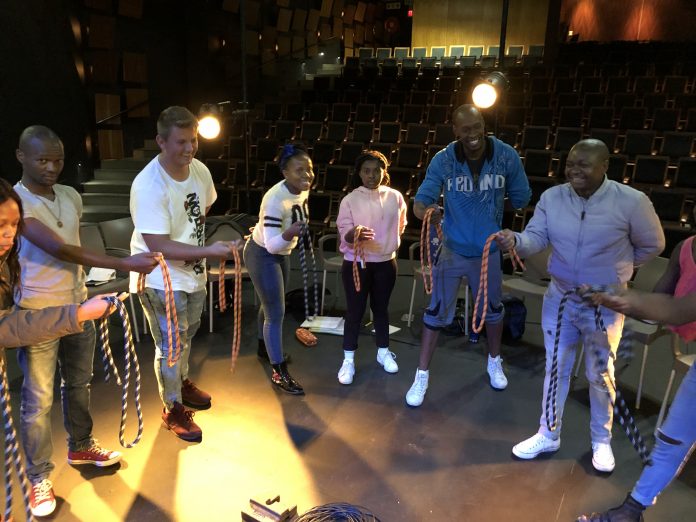 The lighting and sound industry with regards to theatre and entertainment is an insular one, if you’re in the industry you either know someone who brought you in or you were born into a circle that it operates in. This provides a challenge to introduce new people to the industry, people with fresh ideas and new perspectives. This is why the University of Johannesburg (UJ) and DWR had a collaborative effort to kickstart interest in the industry with a UJ Tech Bootcamp Workshop aimed at Highschool students and teachers who are involved in drama.

The event started on the 12th of April and continued to the 14th, a 3-day crash course designed to peak interest and educate. DWR wanted to have an environment where the students could feel part of the industry they were exploring and the UJ Arts and Culture theatre provided just that with the addition of Jade Bowers who works at UJ as the Stage Manager and Production liaison. With the setting under wraps, the next step was to get the best possible instructors to impart their knowledge. DWR’s Michael Broderick, Jannie de Jager and Jaco Beukes were chosen to each talk about a specific function related to the industry.

Day1 of the event, April 12th, involved the delivery of equipment and the setup. Elias Tsotetsi of DWR packed a van filled with the best demo equipment at DWR and dropped it off at UJ, this correlates with the belief that if you want to get the best out of the youth you should treat them as knowledgeable and capable people and the inclusion of prime equipment was a deliberate choice to treat them with respect. The unpacking was democratic as Michael, Jannie and Elias were all hands on, the set up was democratic too. Jaco handled the audio set up- the DiGiCo S21, an Audix Q7 microphone, the L-Acoustics Syva (always an impresser) and a Quest Sub. All chosen to demonstrate a full range of what sound can offer. Michael and Jannie handled the lights which were UJ’s own, a few Parcan lights used to set the atmosphere. Jannie ensured they were all properly secured and then met with UJ’s grandMA1 Light (old but gold) to get the lights on and focused. Michael, who doesn’t know he is 57, made his way up the highest ladder possible and focused two lights whilst adding a blue colour gel to continue to set a calm atmosphere.

In Michael’s own words “aesthetics is everything” and his vision was an intimate setting with the lights surrounding the curved chairs set very low to provide glow whilst all the other lights in the theatre were off. This created an intimate setting that felt informal with the intention to inspire dialogue. The importance of the set-up can be summarised by Michael once again, “let’s show them the transformative magic of lighting before we even speak”.

As the students rolled in there were snacks and drinks in the green room, those in attendance were a mixture of students who enrolled through self-interest like Joshua Zeelie who was keen to learn about sound. There were a few girls from Roedean who were accompanied by their Drama teacher Dorianne Alexander, who seemed just as if not more excited than her students, Phana Dube along with two of his students from the Hillbrow Theatre Outreach Foundation along with others. Promptly at 3 pm everyone settled in and tuned their ears to Michael Broderick.

He acted as spokesperson for the lighting itself and the art form it can be. “Lighting is visual communication, it acts as a character, an enhancer of the senses and the theatre is a sensory experience” he explained and elaborated further by saying “all the programming and hard work and setting up becomes so fulfilling when the lights hit the stage.” He spoke in detail about the theatre, how its changing and how the students in attendance have the power to shape its change.

“You might think that this is all basics but without the basics there is nothing. Everything starts with the basics and even a single light can be powerful in telling a story”. Everyone hung on to his words and made notes, before starting his talk he explained he wanted to “plant a seed and instil passion” and his passion is contagious and definitely spread. His demeanour immediately encouraged questions and the talk was less of a dictation and more of dialogue, which only seemed to further edge the students on in their curiosity.

The next day was Jannie de Jager’s turn to inspire. His charm works well in a teaching environment, and the students all watched and listened without one moment of existential sighs, they were captivated. Jannie’s portion of the course was to put action into Michaels words. A hands-on practical breakdown of the theory.

Jannie’s course reaffirmed the building of the basics, making sure the simpler tasks were carried out efficiently will ensure a smooth running, great atmosphere and safety. Safety seemed to be a point that was reiterated throughout as it is the number one priority, any job done safely is a job done well.

Jannie explained why the simpler tasks such as cable rolling and knots were important, they ensure quality and again safety. After his practical demonstration, which included tons of hands-on teaching it was time for the students to compete in a small game to test their skills.

A cable rolling contest that emphasised proper technique over speed and a knot tying contest to give the students a first-hand account of the trust that the entertainment industry puts into their knots.

Following the crash course, next Jannie and the students were all involved in a one on one guide on how to focus lights and control the lights through UJ’s grandMA1. The students were all involved in a hands-on way and each given time with the console. Narrowing, widening and then turning them on and off using the grandMA1. The basics, the building blocks on which expertise is built.

Sunday, 14th April was the sound day. The first recognisable character trait of Jaco Beukes is his pure energy and excitement for all things sound related. Jaco (known at DWR as ‘Jaco “it’s complicated” Beukes’ due to his comprehensive sound knowledge) was emphatically up for inspiring the young minds in attendance. His crash course was centred around the fact that most people are aware of sound in terms of what sounds good and bad whether they are conscious of it or not. He applied this rule to the course in an incredibly practical way. He had the L-Acoustics’ Syva hooked up for control on the DiGiCo S21 for the mixing and sound of an Audix OM7 dynamic microphone.

Students were asked to talk or sing if they were willing and Jaco broke down the basics of what it takes to get the mix right. This was an audible representation of the what a console is there for and the things it can achieve and be completely captivating. Hearing the effects of the console and how it is used to shape the performance was the perfect strategy to get a bubbling curiosity out of the students in attendance and Joshua Zeelie, who attended out of interest in sound, walked around with a smile on his face the whole day.

To expand the number of smiles Jaco showed the class what great sound really sounds like and pumped the volume up on the Syva’s. Even with little sound knowledge, everyone was fascinated by the punch and quality of the Syva’s ability in delivering crystal sound throughout the theatre despite it being such a compact system. Bigger isn’t better, L- Acoustics is better.

Now that everyone who attended the boot camp had been fed a good helping of technical knowledge, it was time for Jade Bowers to expound upon the Stage Management aspect of theatres. Her comprehensive talk spoke on the intricacies and battles of running a theatre and how these endless tasks bring great joy, the Joy of seeing all your hard work culminating in the joy of others.