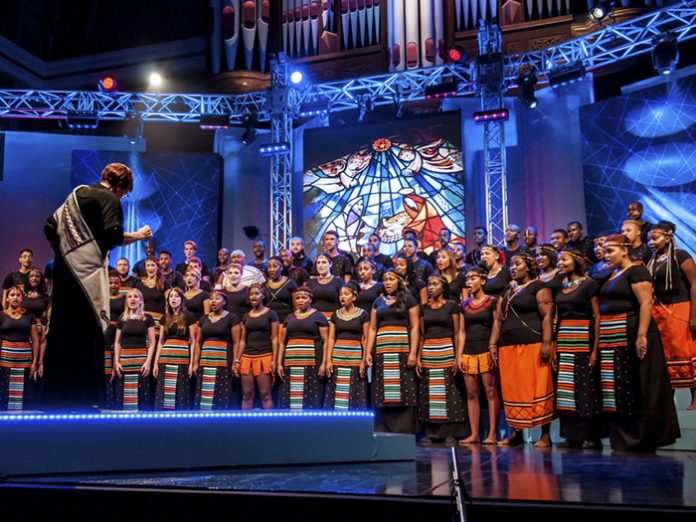 Varsity Sing travelled to universities in Cape Town, Port Elizabeth, Bloemfontein, Johannesburg and then all the way back to Cape Town with Blond Productions and Dream Sets transporting 15 tonnes of set and technical gear. The competition started in May with the finale hosted in mid-October and was hosted by Kyknet, an Afrikaans television channel. In the midst of university students uprising with the Fees Must Fall campaign in South Africa, Varsity Sing proved that music transcends all boundaries.

Christiaan Ballot from Blond and Robert Hoey from Dream Sets had to come up with a design that would accommodate all the different venues. There had to be continuity and the set had to be the same. “When we originally pitched we wanted to go for a bigger set,” explained Christiaan. “After going to each university venue to measure, we realised the original would not fit and we had to scale it down. At the same time the set had to accommodate the largest choir of the competition which was made up of 42 members.”

As the crew had to be in and out each venue in a very short time frame, Robert and Christiaan cleverly created a Gig in a Box, so to speak. With steps shaped in a half moon, the airy set had Prolyte trussing forming the basic back outline onto which lighting fixtures were hung and where a 6mm LED wall was suspended for graphics material to complement each song item.

The conductor was placed on a podium at the centre of the set. The judges’ bench, facing the stage, was also created by Dream Sets. The judging panel include a celebrity guest, with brilliant artists such Arno Carstens, Jannie Moolman and Laurika Rauch.

“We wanted a slick, clean look,” said Christiaan. “An emphasis was proving that choirs are not old fashioned but relevant, modern and an important part of the South African arts and culture.”

The lighting was designed by Mauritz Neethling and programmed by Hein Stroh on a grandMA2 Lite A grandMA VPU was used for content on the LED Screens. The lighting equipment list comprised of 12 Robe miniPointes, 24 Robin LEDBeam 100 and 24 Robin 300 LEDWash and various conventional lights.

“Lighting had to be suitable for television, and we had to bring in mood and atmosphere to give each song its own identity,” explained Christiaan. “Why this event was so cool is that we were taken out from our comfort zone.” While the main crew consisted of four technicians from Blond and two from Dream Sets, with extra hands hired in each town everybody jumped in to set-up, strike, build stages, hang lights – whatever was needed.

“We loved being a part of this production which showcased the rich tradition of beautiful choral singing in SA,” said Robert. “The competition saw an integration of people,” ended Christiaan. “Music has the ability of bringing everyone together.”