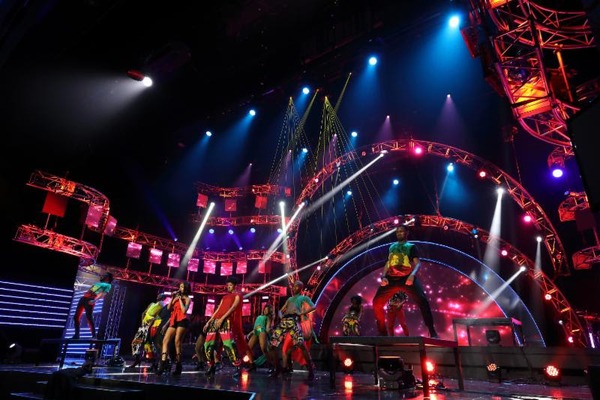 Philips Entertainment Lighting, the world leader in lighting, has announced its latest lighting fixtures play a key role in enhancing the quality of the television pictures for the current series of South Africa’s televised talent contest, Idols.

The LED-based new Philips VLZ Profile fixtures from Philips Entertainment Lighting are providing a quality of light output that enables even more finely colour-balanced television pictures for the latest series.

Produced by Mzansi Magic channel 161 DSTV, Idols is currently in its 13th season. Lighting Designer for the seventh consecutive year, Joshua Cutts, along with Director and Executive Producer, Gavin Wratten wanted to build on the show’s highly successful 12th season by further enhancing the set and lighting design.

“I was looking for two things,” said Cutts, “a strong, iconic backlight and a strong profile with framing capability for my keylight. It was also important for the television cameras that these fixtures had low levels of green within the lamp and reflector.”

Cutts found what he was looking for in the Philips VLZ Profile, when he was introduced to the fixture by Philips Entertainment Lighting’s local sales partner, DWR Distribution. “I was very excited by the VLZ as a powerful LED profile that I could use as keylight,” says Cutts. “I was amazed at its brightness and the colour of the white LED on a person’s skin. It was great to see an LED profile competing perfectly with the existing large profiles on the market. The VLZs have great optics, so my iconic backlight is very sharp and crisp, which is a great bonus.”

With the quality of the television pictures in mind, Cutts praised the Philips VLZ’s light output. “I am really enjoying the colour temperature of the LED source,” Cutts added. “The quality of the output is outstanding and refreshing. The great colour temperature has allowed me to set the white level of my cameras to 6000 Kelvin, making the other light sources on the stage – LED screens and LED washlights – appear more accurate in their colour. What I see with my eyes in the venue is now what I see through the camera on screen. All the colours are richer and fresh.”

Cutts explained: “Dream Sets provided all the technical equipment for Idols, and their project manager Eben Peltz and I have worked closely together over the past few years to raise the technical standard of the show. New technology like the VLZ allows us to do just that – and keep it exciting. They delivered way beyond my expectations and I would happily use them again to create great television!”
Grant Bales-Smith, General Manager EMEA, Philips Entertainment Lighting, concluded: “The VLZ family of fixtures is a result of our commitment to providing the professional show lighting market with lighting tools that meet both the practical needs and the required performance standards of leading lighting professionals. High quality lighting is essential to the production of beautiful television pictures, and we are delighted to be fulfilling that need.”