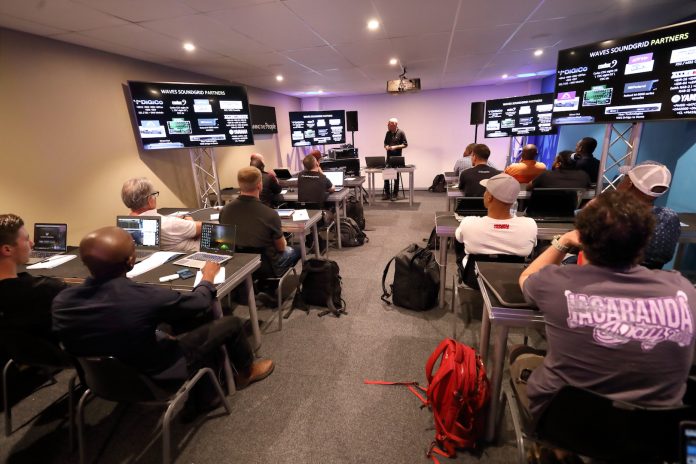 The very first Waves Training to ever be hosted in South Africa was presented by Eran Ben
Zur in conjunction with DWR Distribution in Johannesburg and Cape Town in February 2019.

What a pleasure to sit down with the undeniably passionate Eran and to see why his visit to
South Africa caused a stir of excitement within the local entertainment industry. While any audio engineer would be proud to include the names of famous artists they had mixed on their resume, Eran Ben Zur, a live product specialist at Waves, sees things differently. “I really believe it’s all about the people and my best time, having been on the road for twenty-seven years, was right here in South Arica,” he said.

The story began in 1995 when Eran started thinking of moving away from Israel. “I was
speaking to a few guys and they asked me if I knew Ofer Lapid and the operation he was
running in South Africa. I had heard the name but never met him.”

Eran arrived in South Africa in 1996 with his bag carrying four t-shirts, two pairs of jeans, six pairs of socks and six pairs of underwear. “I thought I was coming for a week or two, but that was it. I fell in love in two seconds. I contacted home and asked them to send me a suitcase!”

The next four years he worked for Ofer Lapid, founder of what is today the largest rental company in the country known as Gearhouse. “It was a feeling that I’ve never had before, the feeling of being a pioneer,” Eran remembered. “Gearhouse had just started and being a part of building something almost from the ground was amazing. It was a unique time
because there was a feeling in the world that people wanted to come and perform in South
Africa.”

Only two years prior to the 1994 elections marked the end of Apartheid. “We found ourselves touring back to back and I didn’t have reason to get accommodation in Johannesburg because we were on the road all the time.”

Finally, in 2000, Eran returned home – he had an opportunity to be part of re-establishing a company in Israel that would become an L-Acoustics partner, and he was asked to mix for Shalom Hanoch, one of the most beloved and enduring Rock stars in Israel. “For me it was closure. As a kid, I had dreamed of working with Shalom Hanoch. When I was sixteen we had slipped through the fence to see his show as we didn’t have money to pay for a ticket. I had to return to Israel because this was my dream.”

Eran continued to work with Shalom for fifteen years, and it has to be said that Ofer Lapid also worked with Shalom earlier in his career in 1976.

It was not the last time Eran would come back to South Africa – he worked as a freelancer on the 46664 AIDS benefit concerts played in honour of Nelson Mandela by South Africa and foreign musicians between 2003 and 2005, again mixing with many local technicians on the shows.

Driven by a love for music Eran joined Waves on a freelance basis in 2008. At a time where high-tech companies were realizing the importance of a different approach to live concert engineer’s needs, Eran was asked to fulfil an unusual role. Similar to job shadowing, he would take an employee from the Waves Headquarters to work alongside him. They would load the truck in the warehouse, set up the gear in the van, fly a PA, set up the stage, do a line check, sound check and then stay with Eran during a show, followed by loadout. “Waves wanted their employees to understand what it meant to be a live engineer.”

Waves Audio is known for its reputable tech support and substantial investment in not only the studio environment but also producing equipment that enhances live events. “The LV1 live mixer is a good example of this,” said Eran. “Combining years of knowledge with the Sound-Grid network technology, integration with 3 rd party companies and Waves’ well-known plugins to create a revolutionary mixing platform.

“Waves goes back to the enthusiasm of people, that’s really important,” said Eran. “In 1991, Waves founders Gilad Keren and Meir Shaashua established the company and designed the first plugin, the Q10 Paragraphic Equalizer.” The Q10 broke new ground in three major areas. Firstly, it was the debut of the audio signal processor plugin, a tool commonly used today. Secondly, its graphic user interface gave users unprecedented control and eliminated the requirement for a DSP engineering background since it automated the filter coefficient calculations. Finally, the Q10 offered sound quality equal to or better than many of its hardware counterparts.

“From then, everything was based on that algorithm, constantly searching and deploying
new technologies, to achieve more excellence every day and that is what made Waves so
special. Every product is taken extremely seriously.”

Waves are the world’s leading developer of audio plugins and signal processors for the
professional and consumer electronics audio markets. Heard on hit records, major motion
pictures, and popular video games worldwide, Waves’ cutting-edge software and hardware
processors are used in every aspect of audio production, from tracking to mixing to
mastering, broadcast, live sound, and more.

The Waves training hosted at DWR Distribution in South Africa covered topics including
Waves Live, Sound Grid Network, V9 vs V10, MultiRack and integration with 3 rd party
consoles manufactures, Plugins, eMotion LV1, Tips and Tricks and a Q&A session
Kyle Robson from DWR had this to say, “Waves is accessible for anyone to buy online and
they have many dealers around the globe instead of official distributors, but as DWR we are making a big effort to promote the brand. We had twenty delegates in Johannesburg and three in Cape Town and being the first Waves training ever held in South Africa it was a huge success. I learnt so much which I was really happy about. Thank you very much Eran for sharing your knowledge and vast experience with us.”