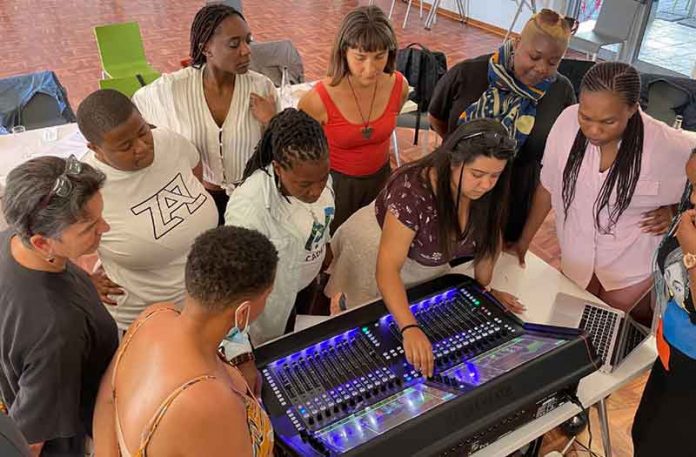 The African music sector has not had an easy ride of it in recent years, with the COVID-19 pandemic having a particularly devastating effect on the industry. However, there is still plenty of hope for the future of the sector, thanks to schemes such as Music in Africa Gender@Work. A training programme aimed at upskilling and increasing the participation of female professionals in the industry, which culminates in the participants working on the annual ACCESS festival, the initiative provides a much-needed way into the industry for talented and driven women throughout the African continent.

For its latest edition, the programme added another string to its bow, with the support of Women in Live Music (WILM) – a European platform and online community for women working backstage in live music. Malle Kaas, CEO of WILM, made the journey to South Africa to help deliver the course to this year’s budding intake. Music in Africa’s Carine Tredgold explained to TPMEA how the collaboration became a reality. “I heard about what Malle and WILM are doing for women in the industry after she was on a panel at WOMEX in Portugal,” she began. “As soon as I heard about it, I was really excited about the fact that they have this organisation that is strong and does so much for women in the European music industry, and I thought we could learn a lot from WILM’s experience of creating a safe space for women in the industry.”

Kaas elaborated: “Carine saw that WILM is experienced in providing workshops through our Safe Learning Environment programme, and she asked how we were doing it and if we could share some knowledge,” she explained. “I then offered that WILM could come to South Africa and support the training – and that was the beginning of the collaboration.”

With a strong background in stage management, Tredgold offers the students insights based on her years of experience in the industry. However, the addition of audio engineer Kaas broadened the scope of the course even further. “Malle has the perfect skills to help us,” Tredgold commented. “I’m not an expert in the technical field, but the collaboration gave the women on the course a larger range of information and the opportunity to broaden their skillset within the training.”

The latest intake comprised 11 women aged between 23 and 37, who all shared the common goal of breaking into the production or technical side of the live music industry. The women underwent a weeklong programme that touched upon everything from stage management and artist liaison, to audio and lighting, before they became part of the crew at ACCESS festival – a three-day showcase that combines music and conference, with some of the biggest talents from all over the African continent in attendance. “I was expecting to meet shy, introverted young women, and it was the complete opposite,” Kaas reported. “They were so alive, always taking initiative, eager to learn more, explore and try new things.”

And the surprises kept on coming, as by the time the students arrived at the festival to start working, they quickly gained the respect of the rest of the crew and, in some cases, almost took over. “My expectation was that the girls would have a hard time and not be allowed to do much, but again the opposite happened – they were dominating by the end of it,” Kaas beamed.

Of course, there is still work to be done in changing the attitudes of some in the industry – a fact that the audio engineer experienced first-hand, when she was ignored by one of the white male Afrikaans engineers working on the festival. “It was outrageous,” she recalled. “I was standing next to a black African audio engineer at the time, and he just looked at me and said, ‘welcome to my world’. There’s clearly still plenty of room for improvement.”

Tredgold concurred: “In terms of our history and a women’s place in Africa, live music and events is a very difficult industry to get into if you’re a woman – especially a young woman,” she said. “However, with all the training I’ve done, the introduction of women into the stage dynamic changes the attitude of everyone in the end. It might be an adjustment in the beginning, and some are still threatened by young women coming into the space and being put into a role of power, but in almost every single case, in the end, all the men have said that this was the most amazing experience and they gained so much from it.”

According to Kaas, the more the network grows, the stronger it will be. “If we can utilise this community where we build each other up instead of knocking each other down, that is helpful in the long run,” she said. “With this programme, where the women are introduced not just to the industry but also to each other, they can build small groups and communities where they can support each other.”

Tredgold added: “It’s been empowering, and it needs to be done more because there are some very talented and dedicated people out there, and if we can just give them the safe space and get them to interact with crews that have been doing it for a long time, everyone will come to see the benefit of that.”

With the lines of communication now very much open, this seems to be just the start of the cooperation between MIAF and WILM. “I would love to come down again. It was hugely inspiring to work with Carine and the young women,” Kaas revealed. “We’re not just giving the girls a chance to see the industry, but this has the potential to be a life changer for them. They learned skills and something about themselves that they could do more than they first thought. It’s a chance to experience themselves and how much power they have.

“It was a huge pleasure to be part of this project,” she concluded. “The programme that Carine has been developing is amazing and full of so much information and detail. It’s great to have this exchange between Africa and Europe, to extend our respective networks and get to know each other’s backgrounds, stories and industry experience.”