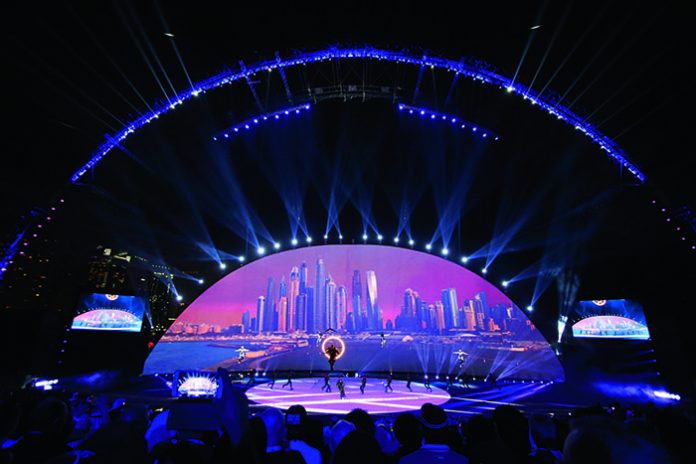 Sheikh Mansour bin Mohammed bin Rashid Al Maktoum, President of Dubai International Marine Club (DIMC) ushered in the 4th FAI World Air Games (WAG) at an impressive and colourful opening ceremony on 3 December 2015 in front of an audience of nearly 5,000 spectators, which included officials and contestants from over 50 countries.

Projection was required on a 54-metre by 21-metre backdrop screen as well as the central 20-metre by 20-metre stage area and a six-metre diameter inflatable sphere, provided by ShowTex, that would be revealed and raised during the show as part of the spectacle while being projected on.

Being an outdoor event and along the beachfront, wind was always going to be Protec’s biggest challenge. An earlier decision to build a hard set backdrop to overcome the wind factor was overturned and a fabric screen was used instead as the backdrop projection surface. While the projection on the main backdrop screen and the stage floor was relatively straightforward, the big challenge was to continuously projection map the moving sphere – a world first.

It meant the use of BlackTrax, a real-time motion tracking system integrated with the d3 Technologies media servers, which would help track the moving video surface while projecting onto it, with the 3D mapping visualised and handled in real-time. This would be the first time this 6D tracking system would be used to motion track a moving sphere. With the BlackTrax technology, 3D moving objects, in this case  the sphere, could move, spin, rotate and still be tracked.

The system’s ability to adjust content to compensate for the adverse weather moving the sphere makes it different from any regular encoder based tracking system. True to form, the wind did play its part in blowing the screen, but Protec, with some accurate planning, delivered some impressive projection mapping.

Technical and Production Consultant, Stefan Wieland, explained: “After a couple of workshop sessions with Protec’s video team and a test build with an orthopaedic seating ball, I could convince the producer to spend extra budget on this system. This was definitely the right decision – it worked so well, the whole team was actually surprised how accurate it was.”

Wieland was approached by the event agency around eight weeks prior to the show, taking it over from pre-production to final planning and contracting. He continued: “About half of the initial concept was technically developed when I joined, with the remaining tasks being very challenging as they constantly changed.”

Although the cover for the sphere looked like it could become another challenge, Wieland credited ShowTex for the “remarkable” solution that it provided.

He continued: “Another curveball was the request from the creatives for stage lifts. As there was no off-the-shelf solution available in the region, myself and Al Laith’s Warren Barlow redeveloped a stage lift system using blueprints from 18th Century theatrical lifts! At the end we had nine electrical stage lifts operating multiple lifts during the show. A big thank you must go to Devan Bezuidinhout from Al Laith who continuously put his magical hands onto the lifts and fixed all teething problems.”

Special effects wizards Flash Art was contracted to make sure the pyrotechnics for the World Air Games were suitably spectacular, using a niche firing system and highly specialised product.

“Our input was as international as the World Air Games and Dubai itself. It was all thanks to the efforts of Polish, German, and Czech pyrotechnicians and riggers installing Spanish and American effects to complement a Lebanese creative director’s concept,” said Piotr Szablowski, Senior Project Manager at Flash Art.

The Delta Sound team, lead by Jentry Scierra, supplied WAG with two hangs of 12 L-Acoustics K2 per side, paired with six L-Acoustics SB28’s, while two L-Acoustics MTD 112b were used as frontfill. The system was driven by four L-Acoustics LA8 racks and managed through LA Network Manager. Artist fold back consisted of six drops of two HK-Audio Cadis CAD 208 speakers with HK FirNet processors and two HK CPQ10 amplifiers that worked well on the WAG’s big stage.

Tom Gellissen mixed the show on an Avid Profile, while Rayno Spies served as Audio Number Two. Delta Sound also supplied a comprehensive communications system, which included a full Clearcom Matrix system, Clearcom 24 way Helixnet system and Clearcom Freespeak. “Due to the importance of health and safety and with aerial artists involved in a live show, the whole control system including communications was fully backed up,” said Scierra.

“This not only included wired back up, all units running on both hard power and UPS but, more importantly, a defined communications procedure implemented by Stefan, should anything go wrong. Luckily none of this was needed and we had a great result.”

Lighting Designer Marco Gattella used a High End Systems WholeHog 4 to operate around 350 moving lights and 120 conventional fixtures for the show. Director of Photography Massiliano Fusco and Project Leader Ivan Pierri also both contributed to the visual appearance of the ceremony. Gattella said: “It was a challenge to find the balance between big show lighting and maintaining the atmosphere created by the projections.”

Dubai-based Magical Water created a 250 sq metre pool for the WAG that contained 125,000 litres of water, along with 36 pumps that fired jets of water 15 metres into the air.

Even2 (sub-division of ES:ME Entertainment Services) was the general rigging supplier for the WAG, providing rigging for lighting, video projection and the LED walls. The seven-strong crew also provided the support rigging for the aerial artists and additional rigging for the lighting rig on tower cranes.

Alexander Würfel, General Manager of Even2 and COO of ES:ME said: “The most challenging part of this project was to rig the lighting trusses in the same shape as the Al Laith arch. This was achieved by using custom spacers and segmental rigging of the trusses.

“We really enjoyed this project as it was a great challenge for our whole team of skilled riggers. It was a pleasure working with the production team and other suppliers – any time again!”

Wieland concluded: “Every element worked so well. The responses from the client, competitors and audience have been so good that we can proudly say we produced a well-received, home-grown show on an international level.”

“I am really happy with the support from all the suppliers. They all put loads of effort into it and contributed extra thoughts and solutions to the show.

“Everyone stepped up and wanted to contribute to make this a success, particularly Production Manager Daryl Payne, who did an amazing job to direct the site and support me where he could, while I was stuck in meetings or workshops with creatives and suppliers.”