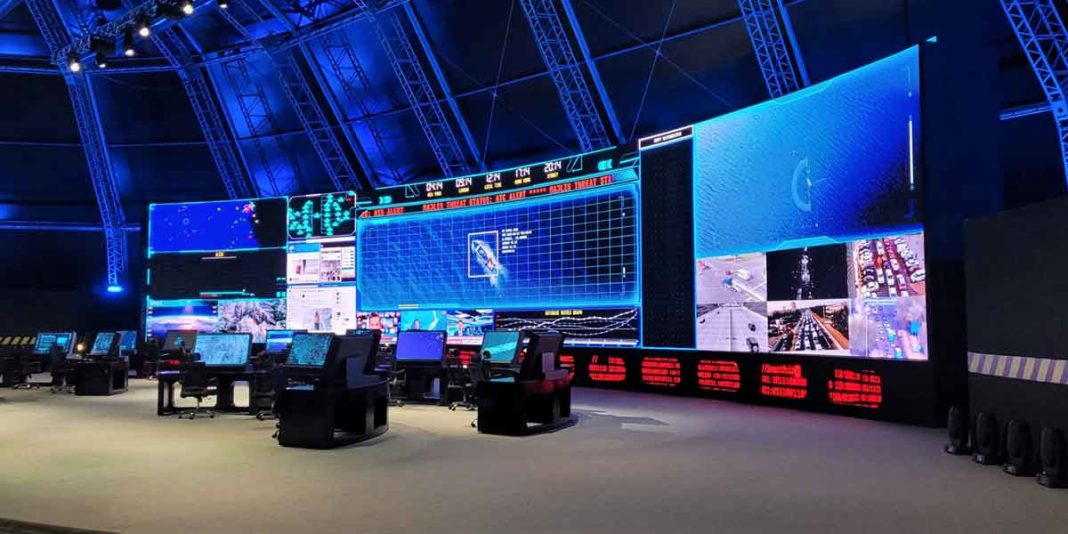 While poor weather conditions including dust storms and high winds forced the cancellation of the grand opening ceremony and some of the planned aerobatic displays, some unique attractions generated high levels of interest at the recent World Defense Show (WDS) held in Riyadh, Saudi Arabia.

Protec was entrusted by its client, WDS, with the full theatrical and stage management along with complete scenic, staging, and technical production of the opening ceremony and a ‘Command and Control Centre experience for this inaugural edition of the expo.

“We ploughed through various challenges and had everything set up and ready, including four 12m by 7m mobile LED screens, scenic elements, audio, seating stands, live cameras, pre-filmed and edited video content and, of course, days of rehearsals to get the opening ceremony together, but the weather gods just weren’t interested. It was a real shame we couldn’t go ahead with this show,” explained Eddie Andradé, who project managed the opening ceremony and Command and Control Centre.

“We did, however, proudly deliver all the shows for the Command and Control Centre experience, which was well-received by all the stakeholders of WDS and the visitors to the expo. This was a unique theatrical production with an intense intermingling of technical content and live performances. The conceptual design and AV solutions were designed by our technical director, Nick Groves, who topped his own incredible creative talent and technical expertise. Talent like his, along with the dedication and hard work of the entire Protec team both, on and off-site, constantly fending off various challenges, made this production the success it was and quite memorable.”

Spanning across an 800,000 sq m site, the World Defense Show featured three large exhibition halls, outdoor exhibit spaces, dedicated demonstration and display areas, a purpose-built 3km-long runway and space for static aircraft displays. Some 600 defence and security exhibitors from 42 countries, took part in the expo, which was set up by the Kingdom’s General Authority for Military Industries, and 80 military delegations from 85 countries also took part.

With shows that ran up to five times per day, the Command and Control Centre was an interactive, immersive, and real-world C5ISR experience, which featured a theatricalised 30-minute audio-visual spectacle, combining live actors with highly engaging advanced virtual environments and constructive simulations.

Housed in Protec’s SUPAdome, the ultra-realistic future all-domains Command and Control concept, where Artificial Intelligence (AI) and Machine Learning (ML) algorithms employing super-computers operated alongside more traditional operational data manipulation technologies, captured a ‘12-hour period of a national response’ when confronted with an imminent ‘strategic crisis’, simulating the future of interoperability at the highest levels. The show itself involved 31 actors and three stage management crew, along with a director and producer and nine tech crew, led by Nick Groves.

Elaborating on the choice of the SUPAdome, Groves explained: “This modular superstructure was a perfect venue solution. It is customisable, extendable, brandable and incredibly weather resistant. It also has impressive rigging capabilities with rigging points throughout the high roof, and each arch able to support three tonnes.”

At full capacity, the structure measures an impressive 36m wide, 84m long and has 15.8m of headroom as well as an internal weight load capacity of over 40 tonnes. “The versatility of the structure means that it can be used in different configurations to suit multiple event formats, from being used as a concert roof to a gala, theatre or as a corporate venue for events and exhibitions,” Groves added. “For the Command and Control Centre experience, we used a three bay extension (out of the possible eight bays) to cover an area of 36m by 54m with a bespoke entrance feature.”

Working closely with Groves, Production Manager, Pieter Smuts expanded on the main advantages of Protec supplying its own structure and equipment directly from the company’s Riyadh facility. “It meant that we weren’t waiting on shipments or on another supplier to build the venue, so setup ran smoothly,” he said. “The venue itself is unique – designed with event loads in mind and providing more weight loading than conventional temporary structures (marquees), we were able to implement the technical aspect without the usual restrictions, which in turn enhanced the final product.”

The load-in and build for the Command and Control Centre was over a period of two weeks, with three days taken for dismantling. The structure took five days, with technical installation running concurrently and taking an additional three days.

One of the big challenges from Protec’s point of view was the venue location – some 70km outside of Riyadh. Restrictions on truck movements meant logistics needed to be carefully planned to ensure equipment was on-site when required. This meant equipment being loaded from Protec’s local warehouses – two-and-a-half hours away – and delivered 12 hours before installation. The site was also very exposed – being a working airfield – so the crew were subject to ever-changing weather, including regular sandstorms.

“We had to work on the project for several weeks prior to its confirmation providing conceptual designs, technical designs, animations, and graphic elements. CAD services provided the finalised site overlays,” Groves revealed. “Full and final designs were supplied by Protec as well as full implementation on site. Content was created for the screens by us, with 22 individual feeds required for the Command and Control Centre desktop screens. disguise was utilised for the main 30m by 6m screen matrix.”

WDS Project Director for the opening ceremony and the Command and Control Centre, Nick Mattingley was quick to acknowledge his positive experience with Protec. “Against stiff competition, Protec was awarded both the Opening Ceremony and Command and Control Centre features at the World Defense Show. Their commercial offer was strongly supported by their regional knowledge and demonstrated competence on previous shows of a similar nature. Their tenacity and diligence throughout this very difficult project are highly commendable. Their solutions-based approach ensured every obstacle was met with options right up to the last minute. The final product exceeded everyone’s expectations. It was a pleasure working with the Protec team.”

Groves concluded: “There were challenging times – long hours, bad weather, tight deadlines, and last-minute changes – but all were met by our team head-on without a single complaint and a smile. To be part of that camaraderie, that family of true professionals you cannot feel anything other than absolute pride. There was never a moment when ‘near enough was good enough’. The whole team strove for perfection, and in chasing perfection, you will always catch excellence.”